The perfect dessert to serve a crowd, Healthier Old-Fashioned Apple Crisp is brimming with lightly sweet cinnamon-spiked apples and topped with a crunchy, satisfying oat topping.

It’s also naturally gluten- and dairy-free, so you can enjoy this comforting dessert more often! 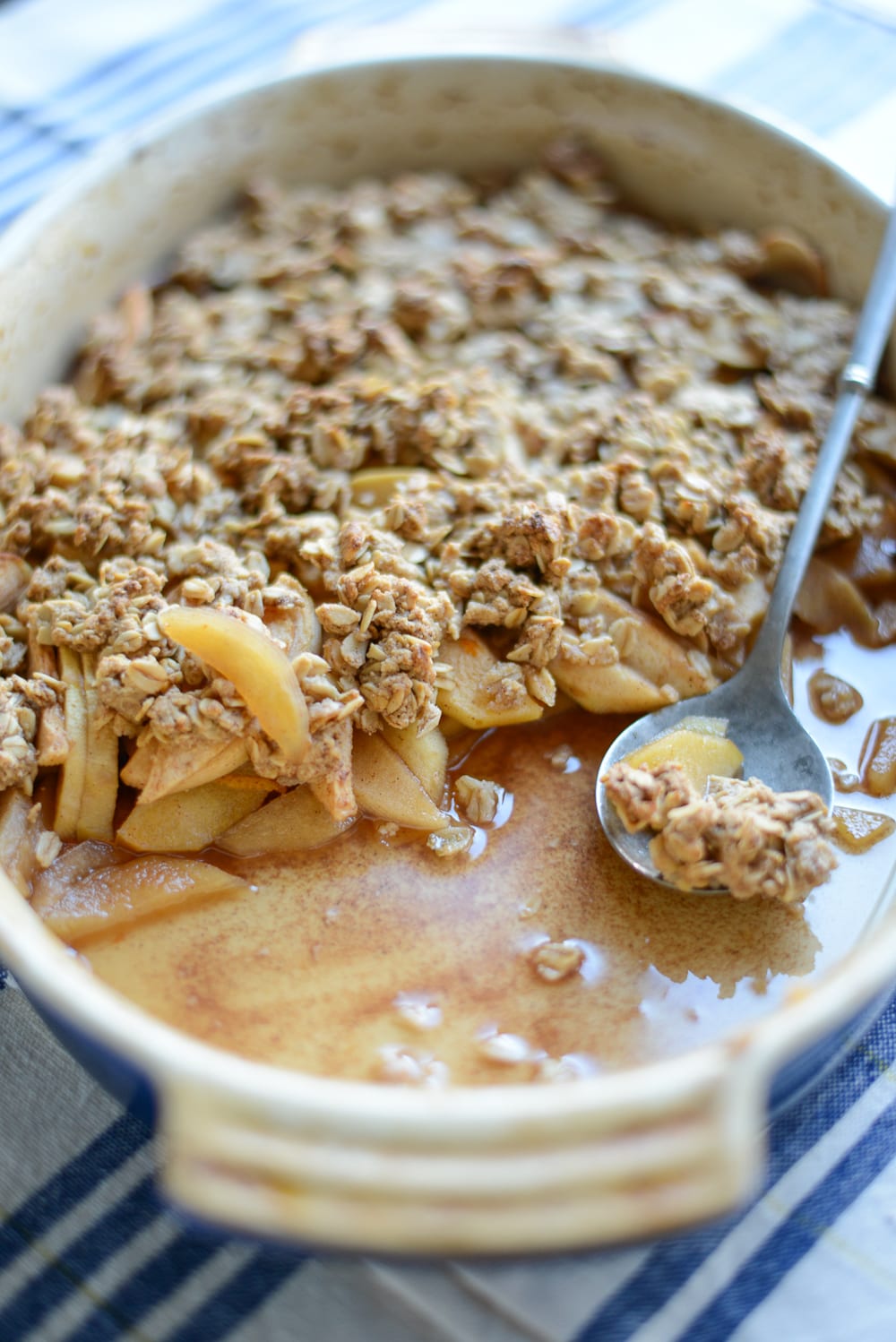 Have I told you guys how much I love Ina Garten? So many of her cookbooks fall into my “most used” category.

She is amazing and I give her credit for teaching me to cook.

I learned to cook largely by watching Food Network in the first years after college, when I was newly married and working as a paraeducator in a classroom for children with autism.

Each afternoon I’d come home from school, flop onto the couch, and watch a lineup of my favorites: Ina Garten and Rachel Ray. Rachel taught me how to chop onions and throw together a meal in 30 minutes, and Ina taught me how to make food everyone wants to eat.

After a year or so of watching Ina’s show I invested in a few of her cookbooks.

I made her apple pie and coconut macaroons and chocolate cake.

I made her lemon pound cake so often I had the recipe memorized and there was so much of it around Andrew started taking it to work for breakfast.

And then there was her Old-Fashioned Apple Crisp.

I made Ina’s Apple Crisp for countless parties, holidays, and potlucks, and it was always met with rave reviews.

Over the years, though, I reluctantly stopped making her recipes because they tend to be heavy in the sugar-butter-white-flour department.

I missed those homey, comforting desserts, though, so I’ve worked on adapting healthier versions so we can enjoy them more often, like in this Healthier Maple Oat Mixed Berry Crisp

This Healthier Old-Fashioned Apple Crisp is based on Ina’s original.

It’s not quite the same as hers, as it uses maple syrup to sweeten naturally, coconut oil in place of butter, and swaps oat flour for white flour.

It’s definitely not as sweet as the original, but it’s still delicious and completely comforting.

We love it topped with Pumpkin Spice Coconut Whipped Cream, but my dad would say you can’t have apple crisp without ice cream, so I’ll leave the choice to you.

This recipe makes enough to feed a crowd, and can be assembled ahead, making it the perfect dessert for Sunday dinner or a holiday meal.

Leftovers are lovely for a snack with tea or even for breakfast, so no worries if there’s a bit left at the end of the night.

I hope this one becomes a favorite at your family table!

I hope you’ll make this one soon. If you do, be sure to share it on Instagram and tag me at @realfoodwholelife so I can see! 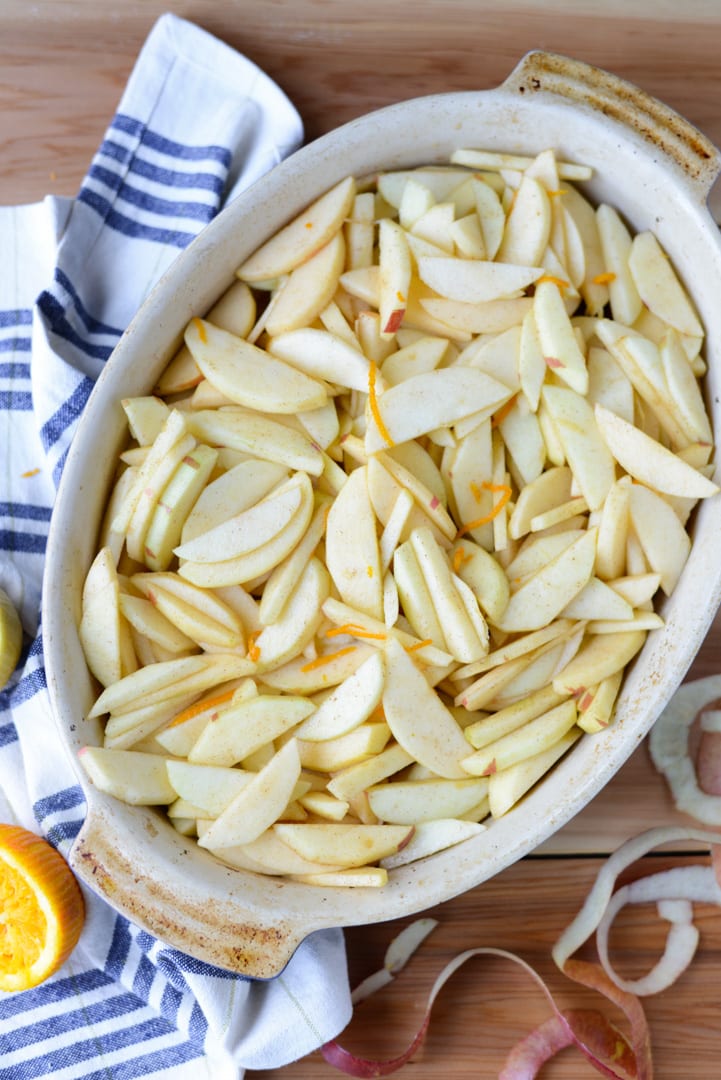 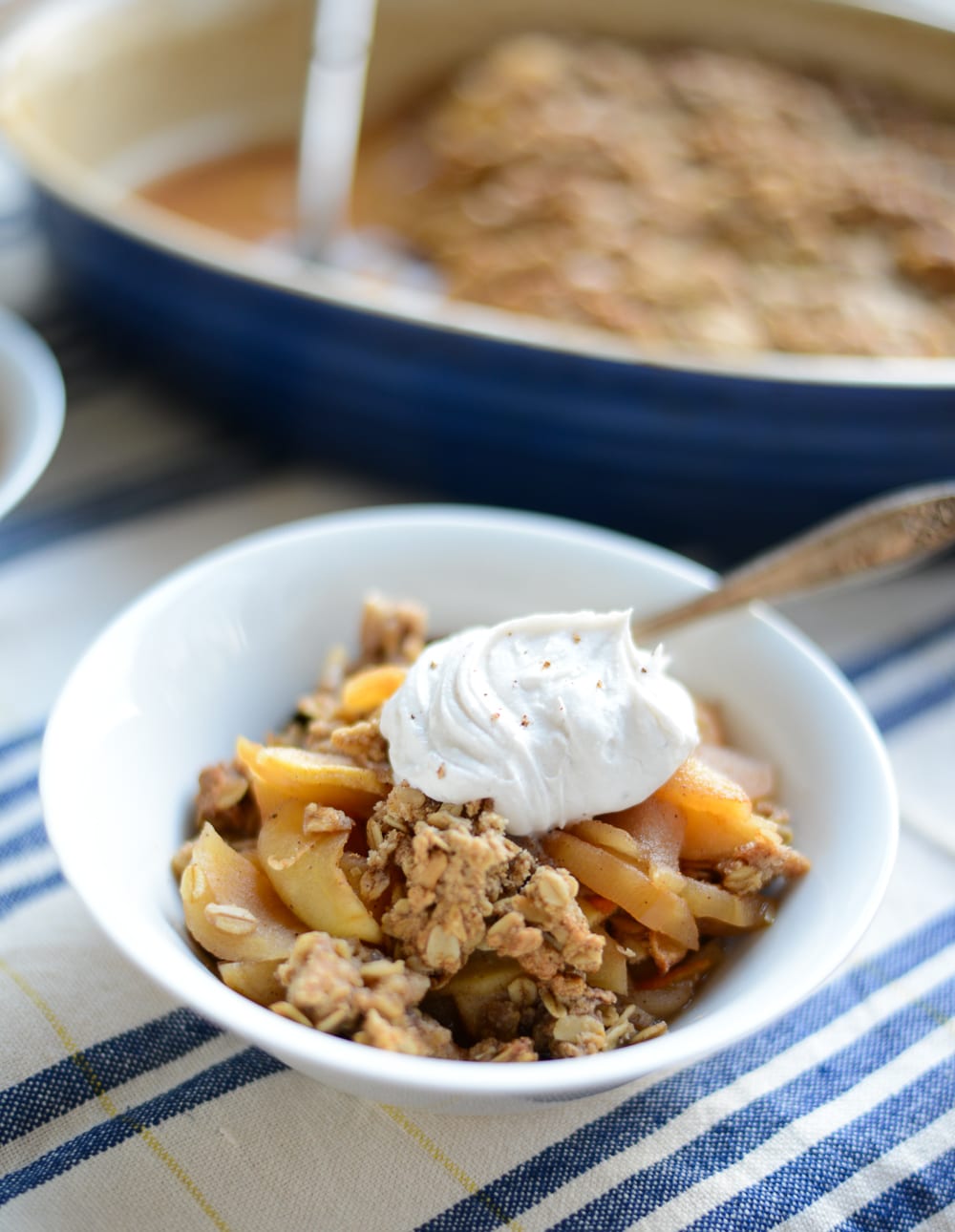 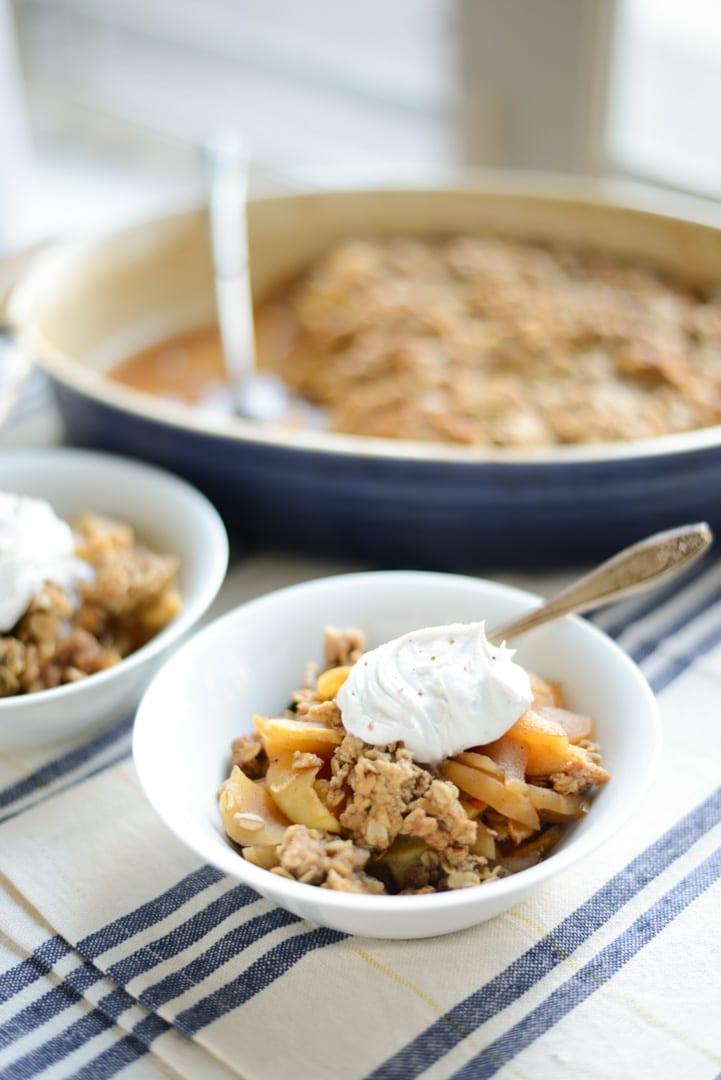 Pin the image below to save Healthier Old-Fashioned Apple Crisp for later! 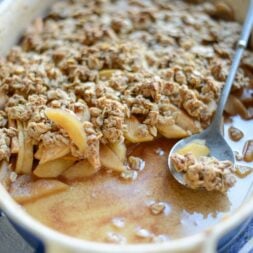 Yield: 8 -10
The perfect dessert to serve a crowd, Healthier Old-Fashioned Apple Crisp is brimming with lightly sweet cinnamon-spiked apples and topped with a crunchy, satisfying oat topping. It's also naturally gluten- and dairy-free, so you can enjoy this comforting dessert more often!
Print Recipe Pin Recipe Rate this Recipe

*Make your own oat flour for this recipe by placing 2 cups whole oats in a blender and blending until a coarse flour forms. Alternatively, you can buy pre-made oat flour at well-stocked grocery stores and online (either regular or gluten-free). Be sure to buy gluten-free oats if you want to keep the recipe gluten-free. Adapted from Ina Garten's Old-Fashioned Apple Crisp from Barefoot Contessa Parties.  Invite your child to help prepare the crisp. Older children can peel the apples, and younger children can help mix the topping and sprinkle over the apples.
Author: Robyn Downs

Nutrition disclaimer
Did you make this recipe?If you do, be sure to share it on Instagram and tag me at @realfoodwholelife so I can see!