How to Create Tiny Habits: Why Small Changes Matter with Dr. BJ Fogg

In this Feel Good Effect podcast episode, we are talking tiny habits and small changes that change everything with Stanford researcher Dr. BJ Fogg. Creating positive change might not be as hard as you think, and we’ll dive into this idea of Behavior Design, the powerful system Dr. Fogg created over the years, with some very tactical takeaways.

How to Create Tiny Habits: Why Small Changes Matter with Dr. BJ Fogg

A few different things led BJ to write his book, Tiny Habits: The Small Changes That Change Everything. It really started in 2011, when he started offering a free five-day tiny habits course and has since coached 40,000 people through it. Now, his book is here and it’s a simple, straightforward method, tested with thousands of people, to create new habits.

From a research perspective, the idea that forming better habits is all about motivation or willpower is just false. Only four months into teaching his course, BJ received feedback from a woman in this program that the course had helped her realize she had endured a lifetime of self-trash-talk. He started to see that was the reaction many were having; people were blaming themselves for their inability to change. To offer another perspective, this book is really about how to make changes so that you feel good and succeed.

Even though this book is entitled, Tiny Habits, it’s really presenting this idea of what BJ calls behavior design, which is a set of models and methods. Chapter by chapter he goes over models and methods. Behavior design refers to a specific set of models about behavior and a specific set of methods. Instead of just focusing on all the old ways of trying to change behavior, it’s more about finding a new approach.

There’s a recipe for a tiny habit. To make flossing a new habit, for example, you can pick something you’re already doing, like brushing your teeth, and insert it into that. So after brushing your teeth, floss one tooth. It starts super small, as small as you can make it. And it’s something you can revise. If it’s not to your liking, you can tweak it. An important part of successful habit formation is trying something and if it doesn’t work right, revising it without getting discouraged or blaming yourself. It’s a design process. 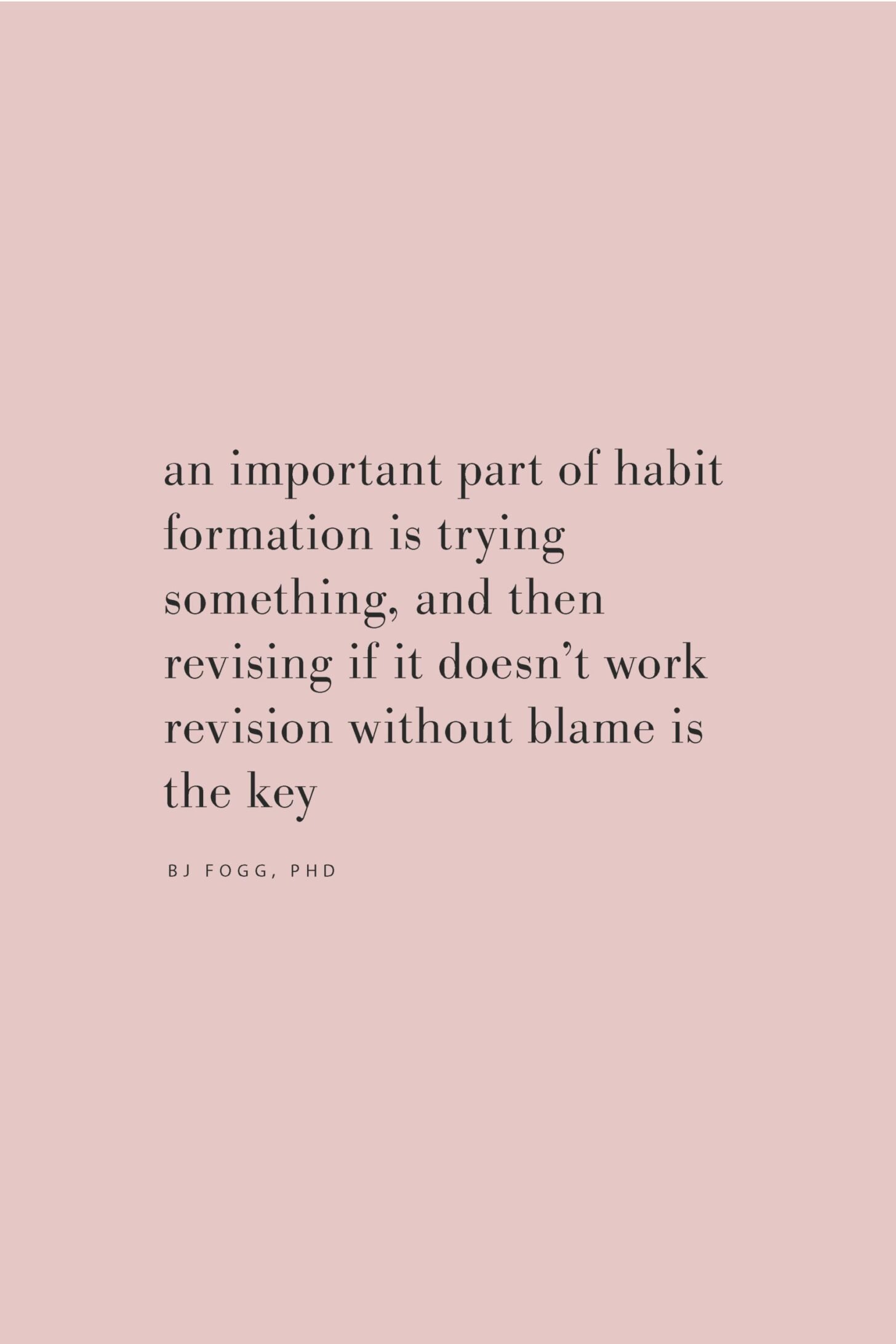 Robyn uses #teamtinychanges to describe this mindset with her work, too. It’s such a radical thought to suggest that you go about sustainable long term change by starting small. It counters everything.

Originally, this idea of baby steps wasn’t considered to be groundbreaking enough, but BJ believed this shift could be a real opportunity to help people change in these small incremental ways. The big-leap approach to transforming your diet overnight or just becoming just super productive isn’t realistic. Our culture supports that kind of thinking, though. Of course, if you have an epiphany or if you radically change your environment then you can make these radical changes. But for most of us, we can’t have an epiphany on demand and we can’t radically change our environment, including who we live with and where we work. What we’re left with are incremental changes to our environment and our behavior. Changing habits in these tiny ways works really well because you can do it without much effort or motivation. And it’s effective! It’s fast, you can start now, it’s safe, it can grow into big things and it doesn’t rely on motivation or willpower.

Still, we often assume that we need big changes, not these tiny ones. But, to get to big changes, start tiny. To get to the big outcomes, start small, focused, and positive in a way that allows you to build.

A real-life example could be wanting to call someone. Perhaps you’re motivated to call this person and your schedule is less busy than usual, so you have the time, the ability, and the motivation. What you might lack, though, is prompting. You might make it to the end of the day and never call that person. It’s not a matter of lacking willpower or motivation; it’s a design issue. Maybe instead, you have a little sticky note on your desk (or even on your phone) that reminds you to call. The simplicity and tininess of it are deceiving, but it doesn’t have to be hard.

The ABC’s of behavior design

In traditional behavioral science, ABC refers to antecedent, behavior, and consequence. But BJ turns it around so ABC means something different in Behavior Design: anchor, behavior, celebration. In the tiny habits method, the anchor is the existing routine you already have that you can attach a new habit, or behavior, to. Then, as you do the behavior to wire in the habit, the positive emotion is a celebration. We have been so conditioned to think that we should force ourselves to do something, work harder, and be better. But this idea that you should build in celebration is so powerful. Emotions are what create habits, not necessarily repetition. When your brain connects a positive emotion with a behavior that you do, that behavior becomes more automatic.

“You can’t form a habit if it has nothing to stick to”. 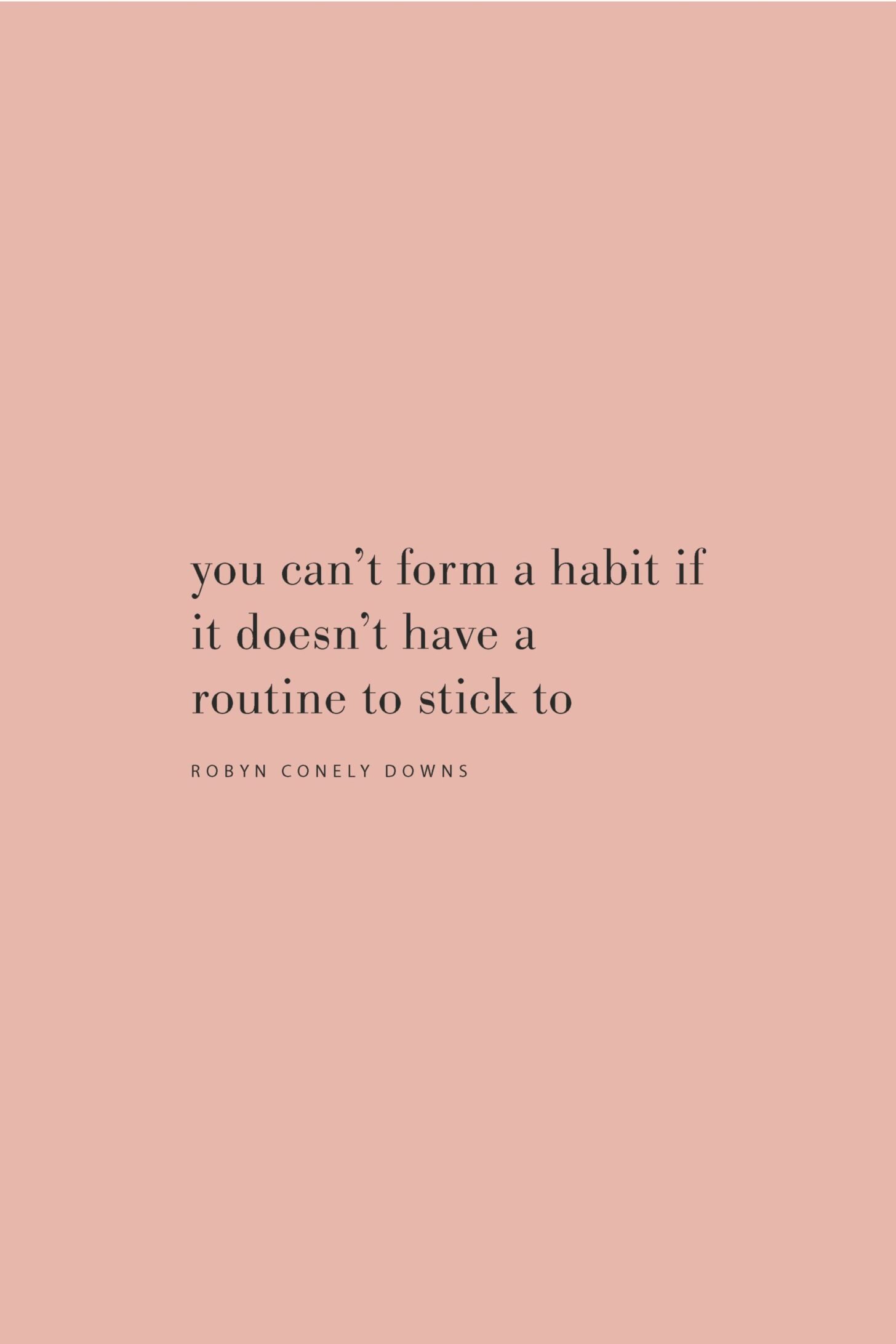 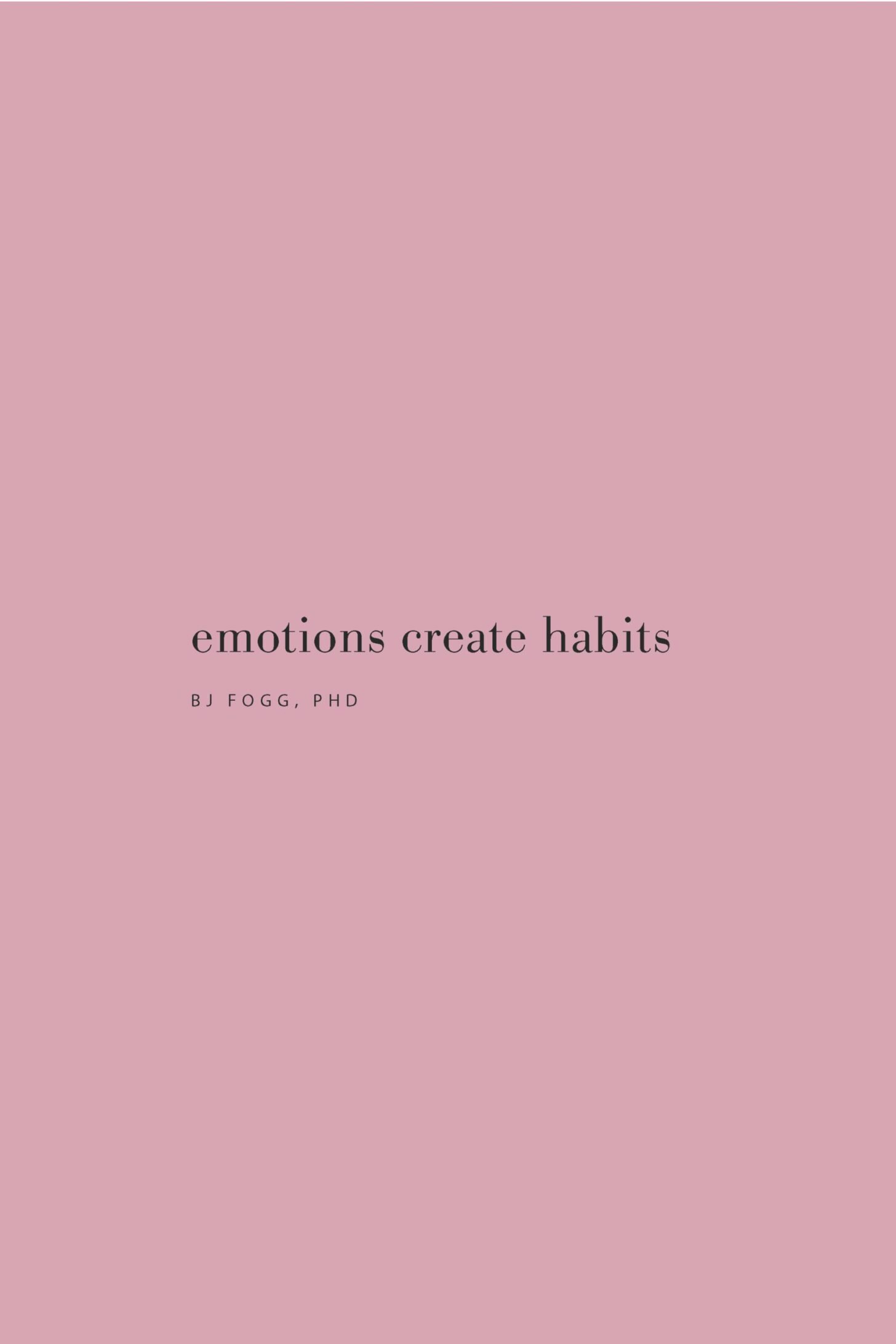 Tiny habits in the brain

When we do something and it feels positive, our brains makes a note through chemical processes, specifically through dopamine regulation that changes the myelin sheathing on neurons. The stronger the emotion, the faster it wires.

In tiny habits, we can leverage how our brains work with emotions; we can hack our emotions by doing something. It might be pouring a glass of water, something that doesn’t naturally give you a feeling of having a superpower. So you hack it and you go, “Good for me!”. Or you do a fist pump, or you do a little dance, or you give yourself a high five. Anything that will create a positive emotion. Then, your brain will associate a positive emotion with whatever tiny habit, or behavior, that you want to do, as small as pouring a glass of water, putting on your walking shoes, flossing one tooth, or reading one paragraph in a book. Anything that you want to be doing more of. In the appendix of his book, BJ includes lists of ways to celebrate and feel successful in such practical ways.

Tiny Habits is a very readable book with true stories and details about people’s lives as well as step-by-step guidance and how-to’s. BJ also created a three-phase master plan for change, a very detailed flow chart, which he included in the appendix. Additionally, there are 300 recipes for tiny habits under 15 or 20 different topics, like Tiny Habits for Caregivers, Tiny Habits for Busy Moms, and Tiny Habits for Reducing Stress.

BJ is also now teaching an online course chapter by chapter. 500 people from all over the world join him on Zoom for 30-minutes at a time and even complete homework for it, like a 10-week university course.

To connect with BJ or learn more about Tiny Habits, you can visit tinyhabits.com for a free five-day program with a coach who will work with you through email. If you want more, you can really dive into it with his book, Tiny Habits. There’s also a two-day boot camp offered for professionals in behavior change, whether it’s health or financial wellness.

“It’s the ability to feel positive and embrace positive emotions rather than resisting them… just a way to experience the world, as stressful as it is… to have this foundation of positivity and that way to create embrace positive emotions in your life. For me, that comes from yes, learning the tiny habits method, and especially learning how to celebrate, but also being close to nature. For me, it comes from playing musical instruments… It comes from trying to nurture and strengthen your most important relationships… It comes from being alone, solitude”.

Dr. Fogg always tries to do groundbreaking work that will improve people’s lives through behavior change. That’s his #1 focus as a researcher and innovator, at Stanford and in industry. Over the years he’s created new ways to understand behavior and new methods for designing change solutions. It’s a powerful system, and he call this “Behavior Design.”

Tiny Habits: The Small Changes That Change Everything

How to Create Healthy Habits with Ease, with McKel (Hill) Kooienga

5 Tiny Habits That Will Change Your Life (Summer Masterclass)

Comments Off on How to Create Tiny Habits: Why Small Changes Matter with Dr. BJ Fogg Leave a comment »