Curious about the secret to creating good habits and breaking bad ones?

This episode is all about the science of making positive changes that stick.

Our guest is social psychologist, Dr. Wendy Wood, whose research addresses the way habits guide behavior and why they’re so difficult to break.

In this episode, we’re diving into the willpower-motivation myth, breaking down three steps to create a new habit, plus talking specific strategies for being more productive and getting things done.

On what led Wendy to write Good Habits, Bad Habits: The Science of Making Positive Changes That Stick:

Wendy started off studying how people’s attitudes and beliefs change.

It quickly became clear that the more interesting question was about why it’s so easy to make initial changes, but it’s so hard to get them to stick.

The question of persistence grabbed her attention.

We tend to blame ourselves for lacking willpower and motivation, which turns into a self-fulfilling prophecy.

Wendy feels like, in science, we’ve gotten to a place where we understand behavior change, but a lot of the insight we have isn’t available in the popular press.

She wanted to convey the science behind behavior change in her book.

The basic premise of her book is that our minds are not one unified whole.

The parts of you that decide to change for the better are not the same neural circuits involved in sticking with a behavior.

We persist in different ways than we start.

You can be very serious about change and actually how to set about changing a behavior, but not succeed simply because you have not set up what’s needed for persistence.

The part we know and understand is our conscious, aware self.

It’s the parts of us that make decisions, sometimes associated with prefrontal areas of our brains and something psychologists call executive control, which is responsible for how we make decisions, plan, and make sense out of our world in a conscious, aware way.

There are other neural circuits that exist and take over after we’ve repeated a behavior often enough so that it starts to become part of habit memory.

“If you want to change, you need to be doing the same thing repeatedly in the same circumstances or context”. 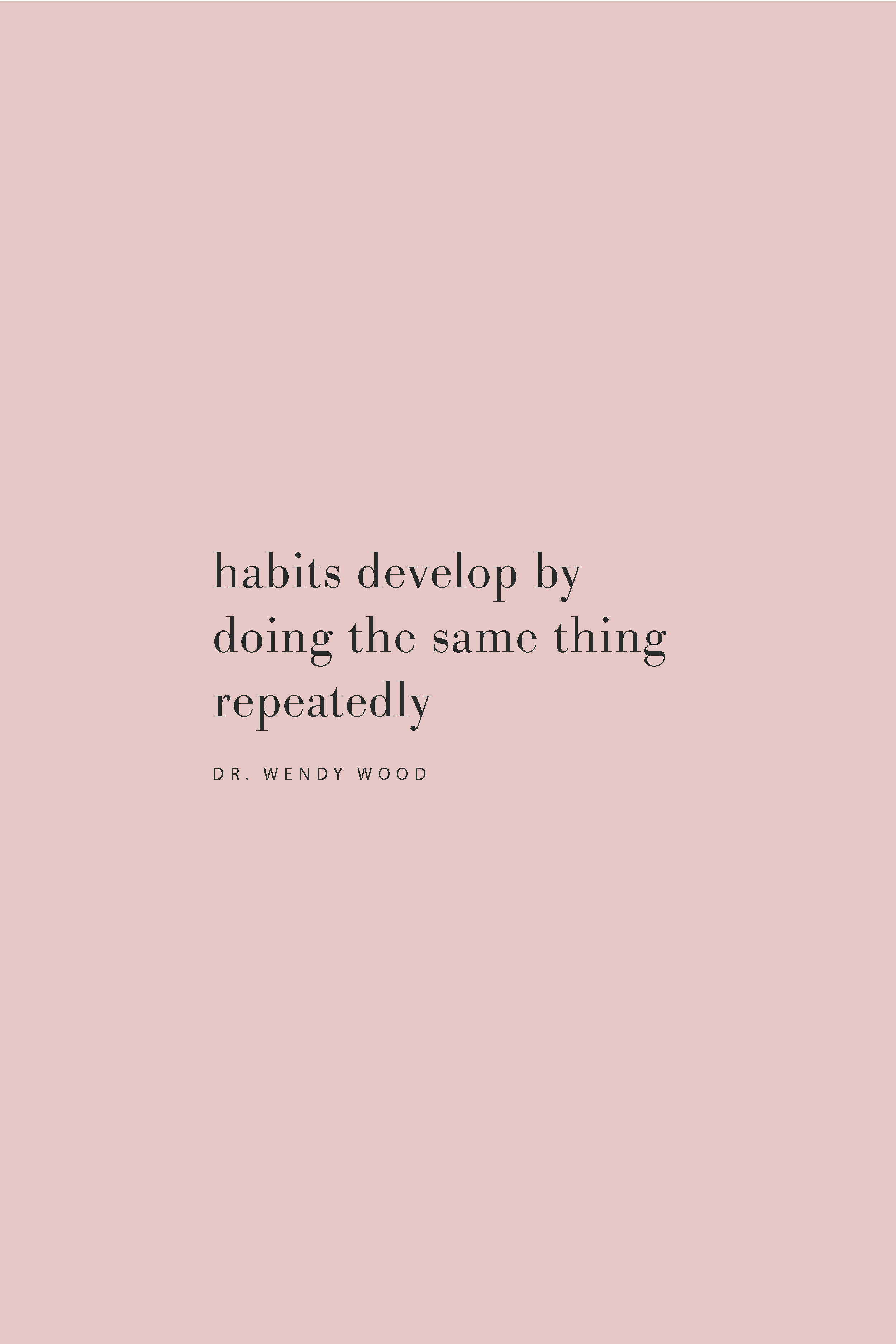 We also need to be doing this in the same circumstances or context, in the same location, at the same time, or maybe part of your daily routine.

A characteristic of a habit is doing the same thing whether you want to or whether it’s the best thing for you at that time, just because you’ve practiced it in the past.

Your brain on behavior change:

Motivation and knowledge are both very important, but that’s typically the only part of behavior change that gets talked about in the general media.

But there’s that third part that is helping us persist and provides the infrastructure to our lives.

We’re not aware of that third part, but it’s really important if you want to stick with change.

Wendy calls this part, “the habit self”.

The 3 bases of habit formation:

In order to change behavior and form a new habit, you need to repeat the behavior often enough so that it becomes part of your habit memory.

Habit memories store only the most important information in your life, what you really don’t ever want to forget.

It takes a lot of repetition before that memory system starts to pick up information.

Most of what happens around us changes, but it’s the consistent things that our habit memories encode.

You want to do a target behavior the same way every time.

For example, let’s say you want to go to the gym a couple of times a week- if you go in the morning one day, at night another, and then you squeeze it in during a break at work another day, that’s not the kind of consistency that’s going to help to build a habit.

You want it to be part of a stable context, maybe as part of your daily routine.

It ties together what you did, in what context, to get a reward.

If you repeat a behavior that you like often enough in a stable context then you just have to see that context and the behavior comes to mind, which is what we call habit-automaticity

We often believe that if we were good enough people with good enough self-control, that we could get ourselves to do it.

But that’s not how our minds work.

Part of making behavior changes stick is shifting your mindset toward the idea that you don’t need to rely on discipline, willpower, or motivation.

Making it work with exercise:

Robyn is trying to develop an after-dinner workout routine.

It’s not a long workout, it’s something she really loves, and she feels good when she’s done.

But what happens after dinner is that she usually sits on the couch to read or manage social media (which comes with a lot of dopamine).

If she can start working out, though, everything is great.

Maybe after dinner isn’t the best time to exercise.

Make it easy on yourself and don’t put it at a time that’s challenging.

You have to make it easy for yourself to do something.

For example, the further we travel to get to the gym, the less frequently we are likely to go.

Distance to the gym adds friction that stops people from going.

One of the reasons might be that her environment is set up for a calmer after-dinner routine.

If the living room was set up, instead, to support working out, it might be much easier to start.

There are things you can do to make it more difficult to continue falling into the behavior you want to change, and therefore easier to change the behavior.

Wendy is a prolific researcher and publisher.

Every writer has a routine; it would be impossible to write without one.

A writing habit removes all of the decision-making that takes up time and energy.

Wendy’s routine is to get up in the morning, open her computer, and write.

But when she was writing the book, that wasn’t enough.

What she ended up doing was writing at home in the morning, going to the gym, sitting in the public library for a few hours where her husband would join her later in the day and work with her, and afterward, they would have dinner together, which was a reward for completing the day as she wanted to.

A public library is great because you can’t talk on the phone, everyone around you is studying, and there aren’t that many distractions, especially if you turn off the internet.

It’s a good place to get writing done because there is little friction.

Trying to routinize, make habitual, the pattern of your work so that you’re not wondering whether you’re going to do it, but instead so that you can put the effort into the creative process itself, that’s what’s important.

“If you have a habit, you can at least get to the point of trying”.

Creating supports and putting structure in place is essential.

On advice if creating routines and boundaries feeling too restrictive:

It’s very easy to waste your time and energy waiting for the right moment or experience.

In a study, researchers asked comedy writers to create endings to a number of scenarios.

Then they asked the writers what would have changed if they had been given more time.

The writers responded that they had produced as much as they could and that more time would not help.

The researchers gave the writers more time anyway, and found that the writers could produce many more funny endings; all they needed was the time

This suggests that we don’t understand how useful simply giving ourselves frictionless time and space to create is.

“We underestimate the importance of routines”. 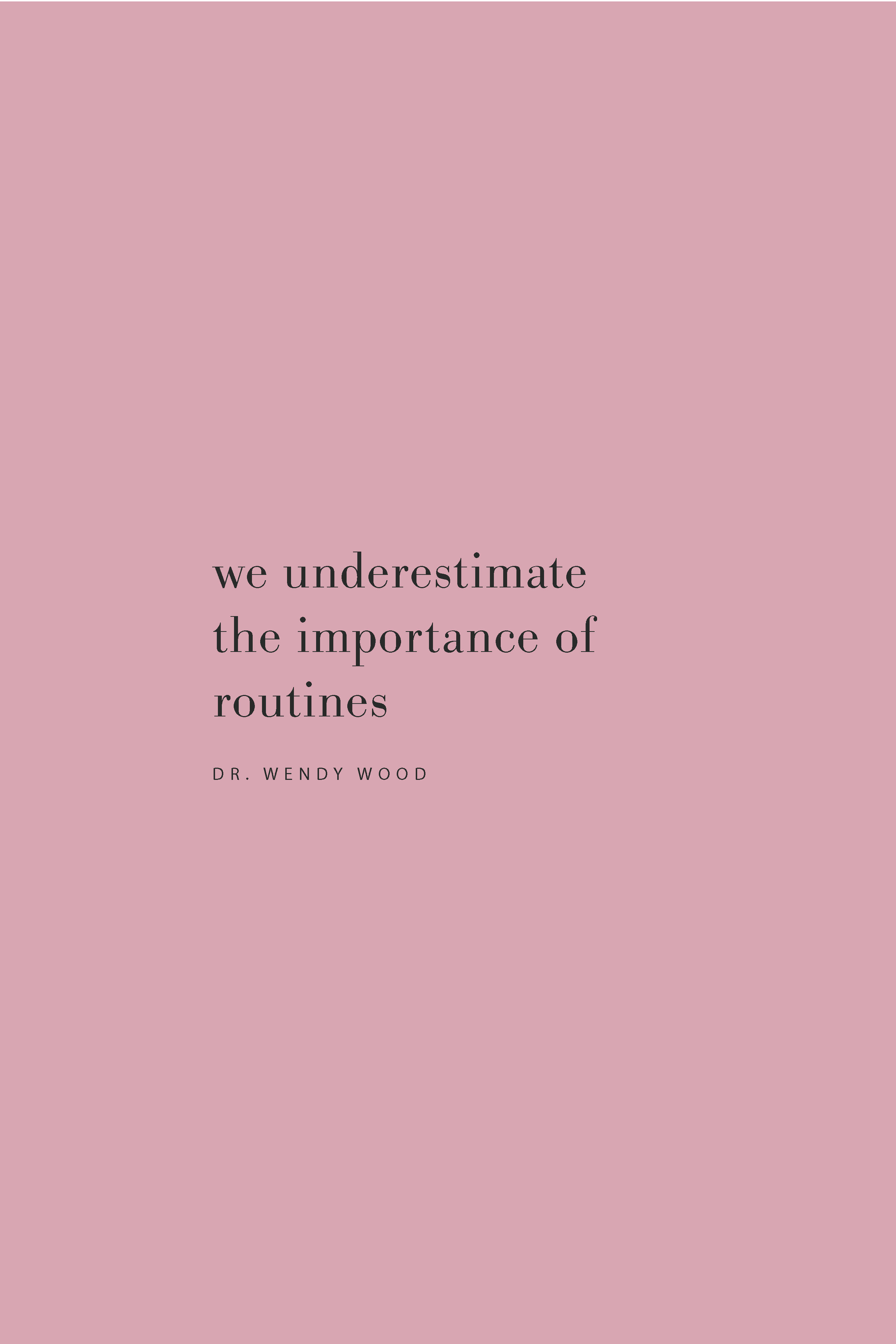 On what Wendy is most excited about right now:

Wendy’s research lab is taking habits apart even further to understand the mechanisms behind habits.

What became of great interest to her is how much we overlook the environments that we’re in.

We think we’re in control, and that the environments that we’re in shouldn’t make that much of a difference.

But they have a huge impact on what we do and the habits we form, more than we realize.

Wendy is interested in helping people realize how they can change their environments to be more supportive of their goals and to make them happier and healthier.

Additionally, one of Wendy’s favorite experiences from writing her book was attending the first week of classes with students at the Culinary Institute of America in Napa Valley to learn how students were taught to produce the same thing over and over again at such a high level.

The first thing the students were taught was something called “mise en place”, which is French for “put in place”.

The basic philosophy is to cut, measure, and put everything in place before you start so that when you start cooking you’ve reduced the friction.

Those beginning chefs were just like us when we want to start something; they wanted to jump in and create.

Instead, structuring the environment around you so that it becomes easy to do in the right way is critical for anything you want to persist at. 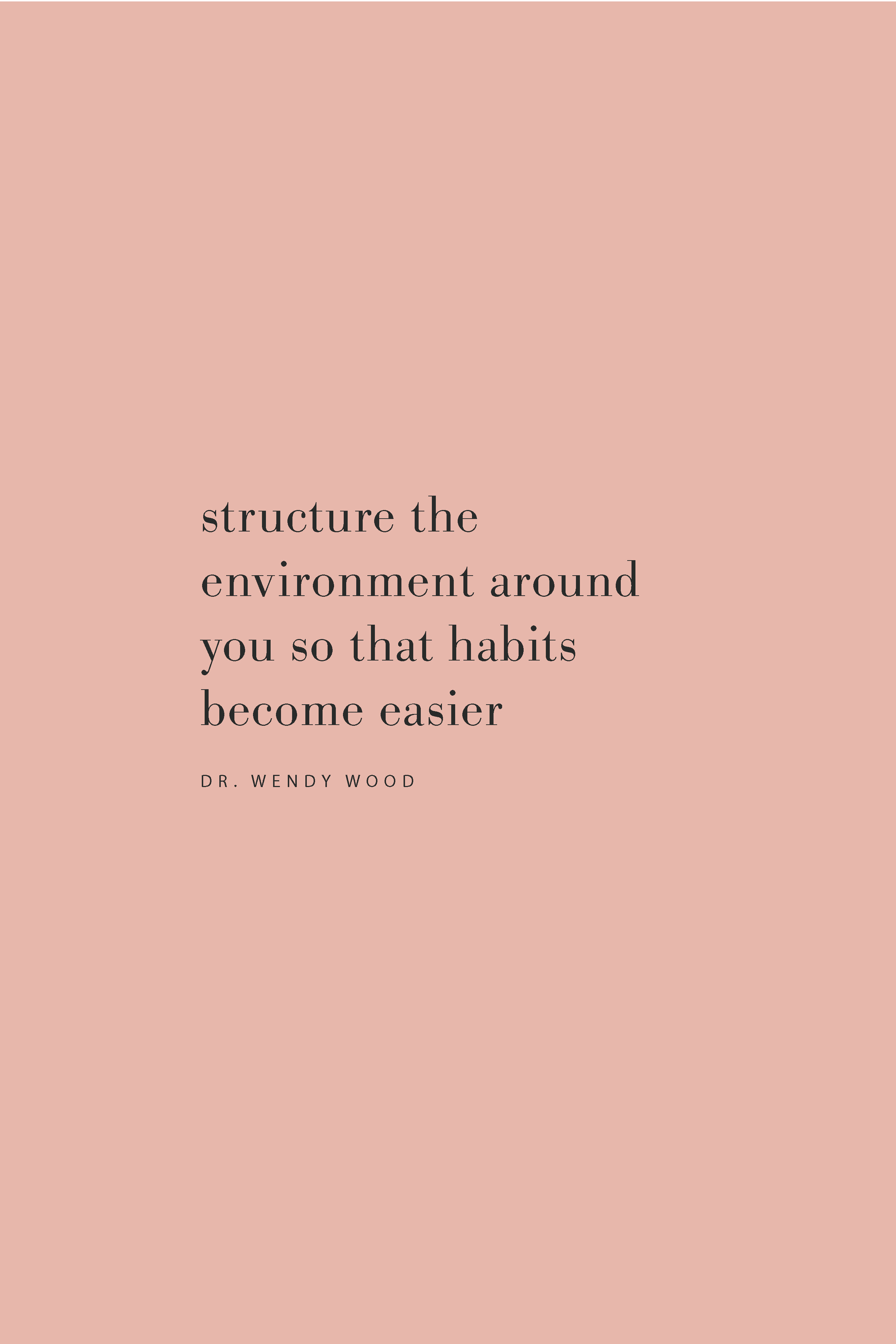 Modify your environment to make one habit easier.

Pick a habit that you want to make more sticky and sustainable and figure out how to make it easier by changing your environment.

Dr. Wendy Wood is a social psychologist whose research addresses the way that habits guide behavior and why they’re so difficult to break.

Dr. Wood is the Provost Professor of Psychology and Business at USC and the author of a brand-new book, Good Habits, Bad Habits: The Science of Making Positive Changes That Stick.

A Peek Inside My Sunday Routine

Comments Off on The Secret to Creating Good Habits & Breaking Bad Habits with Dr. Wendy Wood Leave a comment »

« Previous PostHow to End Food Decision Fatigue
Next Post » The ONE Thing I Do Every Sunday: A Peek Inside My Self-Care & Productivity Routine