The Autoimmune Disease No One Has Heard Of: What I Learned from a Pernicious Anemia Diagnosis – Real Food Whole Life 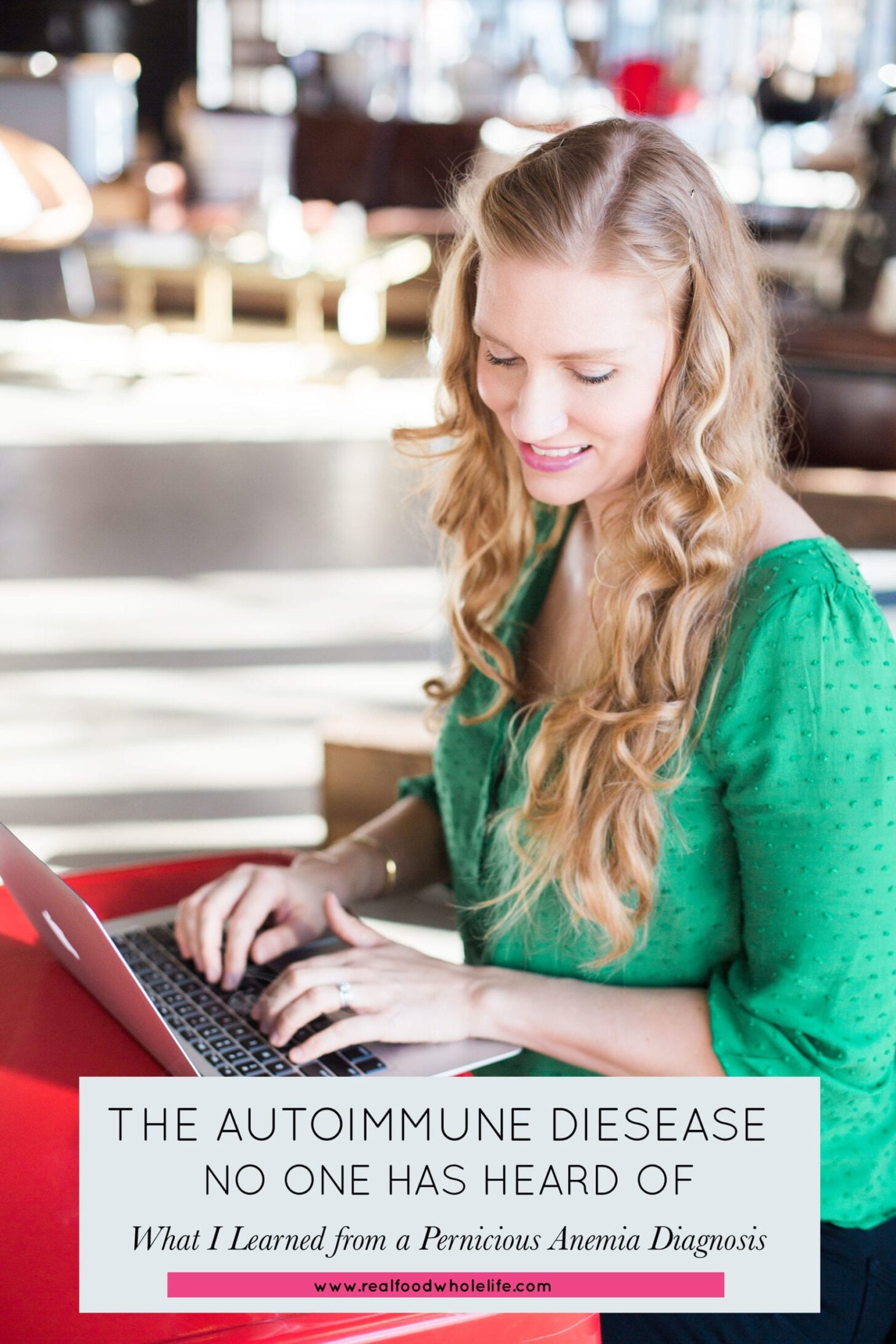 It started with a metallic taste. Or at least that’s what I noticed first.

We were in the car, returning to Portland, Oregon, after attending my dad’s retirement party in Eugene.

I was riding in the passenger seat, Andrew was driving.

And as I looked out the window at the green pastures rolling by I suddenly became aware of a strong metallic taste in my mouth.

I thought the taste was strange and annoying, but other than that I really didn’t think much about it.

But over the next few weeks the taste became a constant. No matter what I tried, I could not get it to go away.

I brushed my teeth more often, bought new mouthwash, made a dentist appointment.

Weeks went by, but the taste only got worse.

At the same time I started feeling a deep sense of exhaustion. Not the normal dragging tiredness of the daily grind. No, this was different.

It felt like my life-force was slowly draining away.

Then my feet and toes started tingling. I originally blamed the tingling feet on the fact that I do barre class in bare feet.

I decreased my workouts and stopped doing anything on my toes. Still, the tingling remained.

Then I noticed a slight ringing in both ears.

It was the ear ringing that eventually made me make the first appointment.

I should note here that it took me 4 months from noticing the first symptom to make a doctor’s appointment.

As a working mom I have a tendency to put my own medical appointments on the back burner.

If my daughter has a medical need you better believe I’ll get her to the doctor. But when it comes to myself I tend put things off.

So let me pause here to urge you to do one thing.

If you have a nagging health issue, if your intuition is telling you something is wrong, please make an appointment. Do not put it off. Do not ignore your body. Do it today. Do it right now.

After 4 months I finally stoped putting my health off and made an appointment.

Not sure what to make of the symptoms, my doctor ordered a round of standard of blood tests and sent me on my way.

When the first round of tests came back everything looked pretty normal. Which I will admit bummed me out.

Of course I didn’t want the tests to reveal anything bad, but the fact that they revealed nothing was upsetting.

“Is this all in my head?” I thought to myself, “Am I just making this up?”

After the tests came back there wasn’t any immediate follow-up, so I went back to my life.

My symptoms progressively got worse. I became more and more exhausted. Making it through the day began to feel like an impossible task.

I cried every afternoon around 3:00 pm because I was so drained. I started to think I was going to die.

As in, I really thought I was going to actually die.

I went back to the doctor and reported how I was feeling.

I realize now that I had two things working against me. First, I looked then, as I do now, like a healthy person.

I’ve since learned that this, combined with the fact that I have a young daughter, made it more difficult for me to get any doctor to take the urgency of my situation seriously.

I was told repeatedly by doctors that I was exhausted simply because I was a working mom.

Which, of course is exhausting. But I happen to know the difference between normal exhaustion and feeling like you’re actually dying.

And let me tell you, there’s a pretty big difference.

At the next appointment I started crying the minute the doctor walked in. I didn’t have the energy to do anything else.

Not knowing what to do next, the doctor referred me to an Ear, Nose and Throat doctor. Um, okay.

I was pretty sure this was not the correct next step, but since I was still experiencing the metallic taste in my mouth I went with it.

At the ENT I had a sinus scope along with several other rather unpleasant tests, all of which revealed nothing of interest.

Then I was referred to an allergist. Again nothing.

Next it was the neurologist, who didn’t think my symptoms were neurologically related, but wanted to do an MRI as a rule out.

At this point I was losing my ability to advocate for myself. I knew I wasn’t making my symptoms up, but I also didn’t think I was ever going to get an answer.

I remember one day telling my parents that I was going to have to quit my job because I didn’t have the energy to work.

While I was talking to them I put my head on the dining room table and started to cry.

Elle, seeing my distress, brought a pillow over and put it under my head. “It’s okay, mama,” she said, “no cry, mama.” She had gotten so used to seeing me crying, and it absolutely broke my heart.

Then that spring we went to Colorado for my childhood best friend’s wedding. While there, I mentioned some of my symptoms to my best friend’s mom, who had recently been diagnosed with Celiac disease.

She was concerned and asked about the blood tests I’d been given. Specifically she asked if I’d had my B12 levels checked. I told her I hadn’t, and promised I’d have them checked upon returning home.

Once home, I emailed my doctor and asked for a B12 test.

She ordered the test, and when the results came back they revealed that my B12 levels were at 100.

Finally we were onto something.

I should note here that most people get enough B12 through diet alone, unless they follow a vegetarian or vegan diet, as B12 is only available via animal products.

Since I am not a vegetarian or vegan, and since I eat a healthy diet, there was no dietary reason why my levels should be so low.

As a side note, if you are a vegan or vegetarian, you might want to consider talking to your doctor about your B12 levels and about taking a high-quality B12 supplement.

Since B12 is only available via animal products, it may be possible that you are not getting enough through diet alone (breakfast cereals and many soy products such as tofu are often fortified with B12, but if you don’t eat many processed foods it’s probably a good idea to make sure you’re getting enough through supplimentation).

After reviewing the test results, my doctor recommended that I start taking a megadose of oral B12, which I started immediately.

After 4 months of the oral B12 I didn’t feel much better, and my numbers weren’t much higher, so I asked to be referred to a specialist.

Nearly 2 years after I noticed my initial symptoms I saw a hematologist. When she entered the room I started to cry (notice a theme?).

I literally begged her to help me.

After looking at my numbers she ordered a test for Celiac disease, one for intrinsic factor, and also agreed to order a course of B12 injections.

I started with the B12 injections that day, and came back for weekly injections after that.

Within a few weeks I started to feel better. Not 100% better, but a tiny bit better. I felt hopeful for the first time.

Then the Celiac test came back negative, and the intrinsic factor came back positive.

Not knowing what the second test meant, I went back to the hematologist. She explained that intrinsic factor is required in order for the body to to absorb B12.

Without intrinsic factor B12 simply won’t be absorbed, regardless of diet.

She then explained that people with low intrinsic factor have pernicious anemia, an autoimmune disease.

After some research on my own, I learned that pernicious anemia is more common in older adults (60 and over) and that it wasn’t easy to diagnose until relatively recently.

I feel lucky, then, to live in the time and place I do, and equally lucky to have finally received a diagnosis.

I am also incredibly grateful to have health insurance, which covered all the diagnostic tests and the B12 injections, a luxury many do not share.

Today I am happy to report that my B12 levels are well within the normal range. I still receive injections monthly, and go in for blood work to test my levels quarterly.

I’ve also since learned more about B12 and pernicious anemia, though there is a true lack of quality information available about the former.

The symptoms of low B12 can vary significantly, I’ve learned, and are often mistaken for something else or ignored completely, which is concerning, as left untreated, clinically low B12 can also cause all kinds of issues, including irreversible cognitive damage.

Luckily I don’t seem to have experienced any permanent damage, other than the slight metallic taste that just won’t go away, and frequent fatigue flare-ups.

My hematologist has been helpful when it comes to the B12 injections, but she is not a specialist in the autoimmune aspect of pernicious anemia, and I have yet to find a specialist who is.

All-in-all, I currently see my health very much as a work in progress.

I’m incredibly grateful to have discovered the B12 deficiency, and I also still hope to better understand and manage the pernicious anemia.

My biggest takeaway from the experience is that it is absolutely essential to listen to your body and to advocate for your own health.

If you think something is wrong, don’t put off the doctor, and don’t give up until you find an answer, even if it doesn’t come right away.

I’ve also learned that while diet is extremely important to overall health, it’s not always enough.

I believe that my recovery has been expedited due to a real food diet, and I also believe that the B12 injections were and are required. Diet alone would not have been enough.

The path to a pernicious anemia diagnosis was long, and my hope in writing this is that it might help someone else find answers a little sooner.

It is also to let those of you with the same condition, or other autoimmune diseases, know that you are not alone. I am here with you and for you.

Disclaimer: I am not a medical doctor, and this post should not be considered medical advice. The information shared is based on my own research and personal experience. If you have medical concerns, please consult a doctor as soon as possible.

Do you have experience with low B12, pernicious anemia, or an autoimmune disease? Share your story with the community, along with what’s worked for you.

37 comments to " The Autoimmune Disease No One Has Heard Of: What I Learned from a Pernicious Anemia Diagnosis "