In this Feel Good Effect podcast episode, Serena Wolf talks all about why shameless experimentation is the key to making things happen. She talks about her path to successful authorship and blogging, reflects on what she took away from her failures, and tackles the issue of mental health stigma and managing anxiety.

The Dude Diet concept was originally inspired by Serena’s concern for her now-husband’s eating habits and long term health.

She wanted to help him eat healthier in a non-scary way, starting with revamping some of his favorite comfort foods with real, whole foods.

She started writing a column on her blog called the Dude Diet, which was meant to be funny and communicate nutrition in an accessible, non-preachy way with some of her recipes.

Although it sounds gendered, the Dude Diet is for everyone who wants to eat a little bit better without counting calories or restricting whole food groups.

There are so many people looking for a sustainable, healthy lifestyle and they can do without feeling like they have to give up the foods that they love.

After getting positive feedback on her weekly column, she wrote her first book that really covered the basics of healthy swaps for a better lifestyle and revamping classic comfort foods.

When readers wanted more dinner ideas, it led to her newest book.

Serena’s hope was that people would feel more excited about cooking, make it a little more fun and less of a chore.

What a lot of people don’t know about cookbooks is that it’s a two-year process from start to finish, the majority of which is spent in isolation with opportunities to question yourself.

Her first book was a learning process, where she learned about what questions to ask and how to plan her own book tour.

For Serena, community is at the core.

Even though she lost money on her first book tour and broke even on her second, The Dude Diet continues to consistently sell as a result of putting herself out there, the snowball effect, and the power of word of mouth, which is often underestimated in the digital age.

It’s not a money-making venture, but it is a long term investment in a career.

When you know who you’re doing it for and why, it becomes an easier thing to do.

Serena went to Harvard and felt behind in life from freshman year.

She was surrounded by type A, top of their class people who had plans for life (or pretended to).

On a whim, Serena moved to Paris for culinary school at Le Cordon Bleu.

She was one of the few people in her program there who didn’t have a lot of cooking experience or a lifelong dream to become a chef.

She hated it at first, but she stuck with it and ended up falling in love with it.

It was very meditative and calming for her.

When she graduated, again, she had no idea what she wanted to do.

She had started a blog, Domesticate Me, to keep in touch with friends and family and share recipes.

It was a creative outlet, but not something she could rely on for financial security.

So she started working odd jobs, got an agent with plans to be on television, but found that she didn’t have the experience that the bigger networks wanted from her.

But, the Dude Diet column got Serena a job as a private chef for a few players on the New York Giants, which she did as she continued to build up the blog.

During that time, she wrote a failed book proposal, in an effort to legitimize herself and work towards television.

It got really far along, but it just didn’t get bought, which was her first soul-crushing experience

Serena had put all of her hopes and dreams into this book basket, anticipating that it would get her to the next level.

She was devastated and thought it was time to abandon all of it and pursue the corporate sphere for a “normal job”.

She still didn’t know what she really wanted, but she knew that she needed to get some street credit for her work before she could move up.

After a while, she put herself in a box thinking people only wanted food from her, even though she had other ideas.

“It wasn’t until I started allowing myself to be myself that I felt like I started to see big returns”.

She still feels so far from figuring it out and the road ahead is unclear, but after integrating all of her passions into her work, she feels so much happier and more secure when she wakes up every day, no longer worrying about whether people do or do not want what she’s putting out there.

Letting go of the fear of disappointing people or being judged was so liberating for her, opening so many doors.

All of the failures have gotten Serena to where she is today, so she doesn’t regret any of it.

A lot of people don’t talk about their failures, which creates an unrealistic portrayal of what success is and how to get it as well as the timeline.

But it takes ten years to be an overnight success. 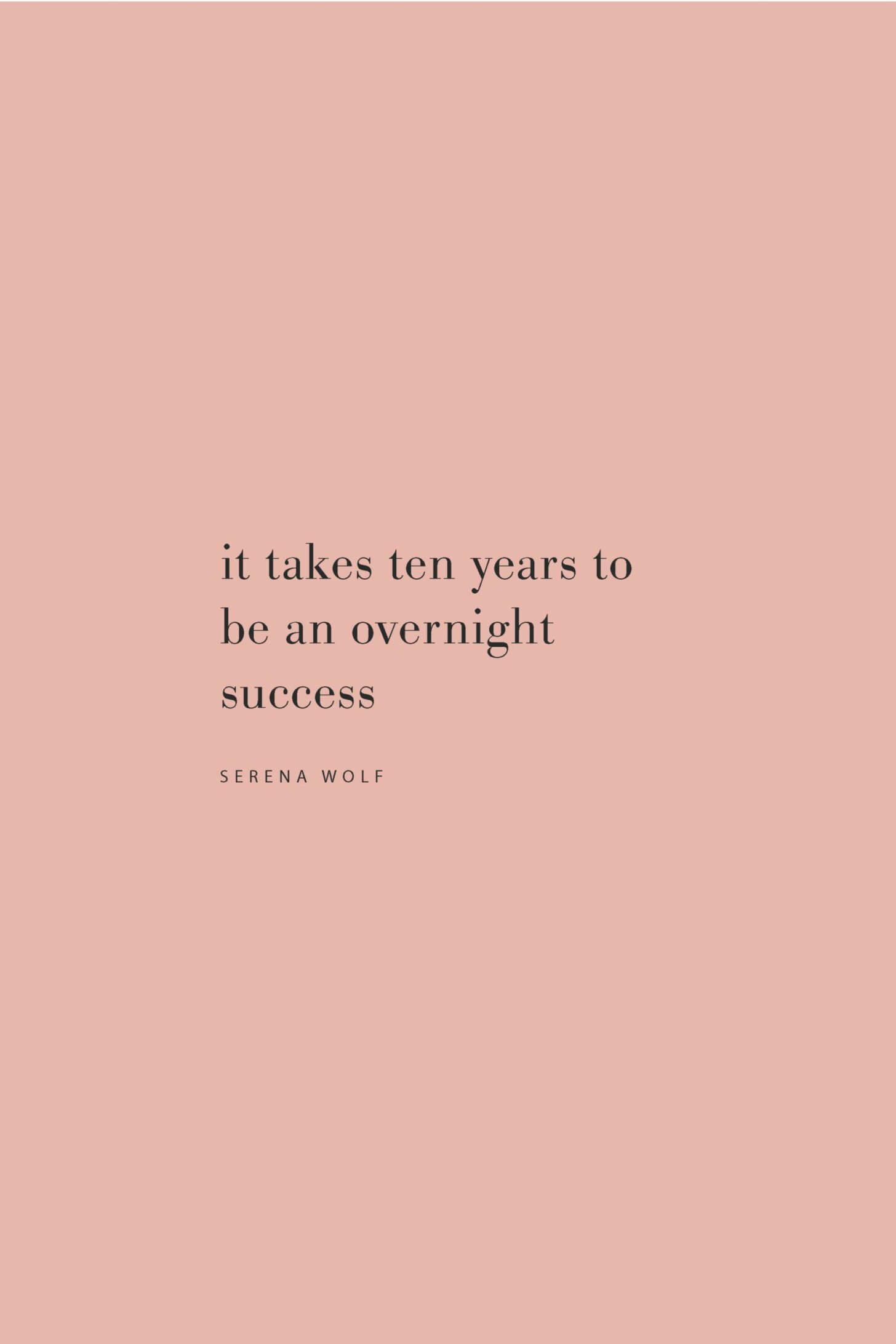 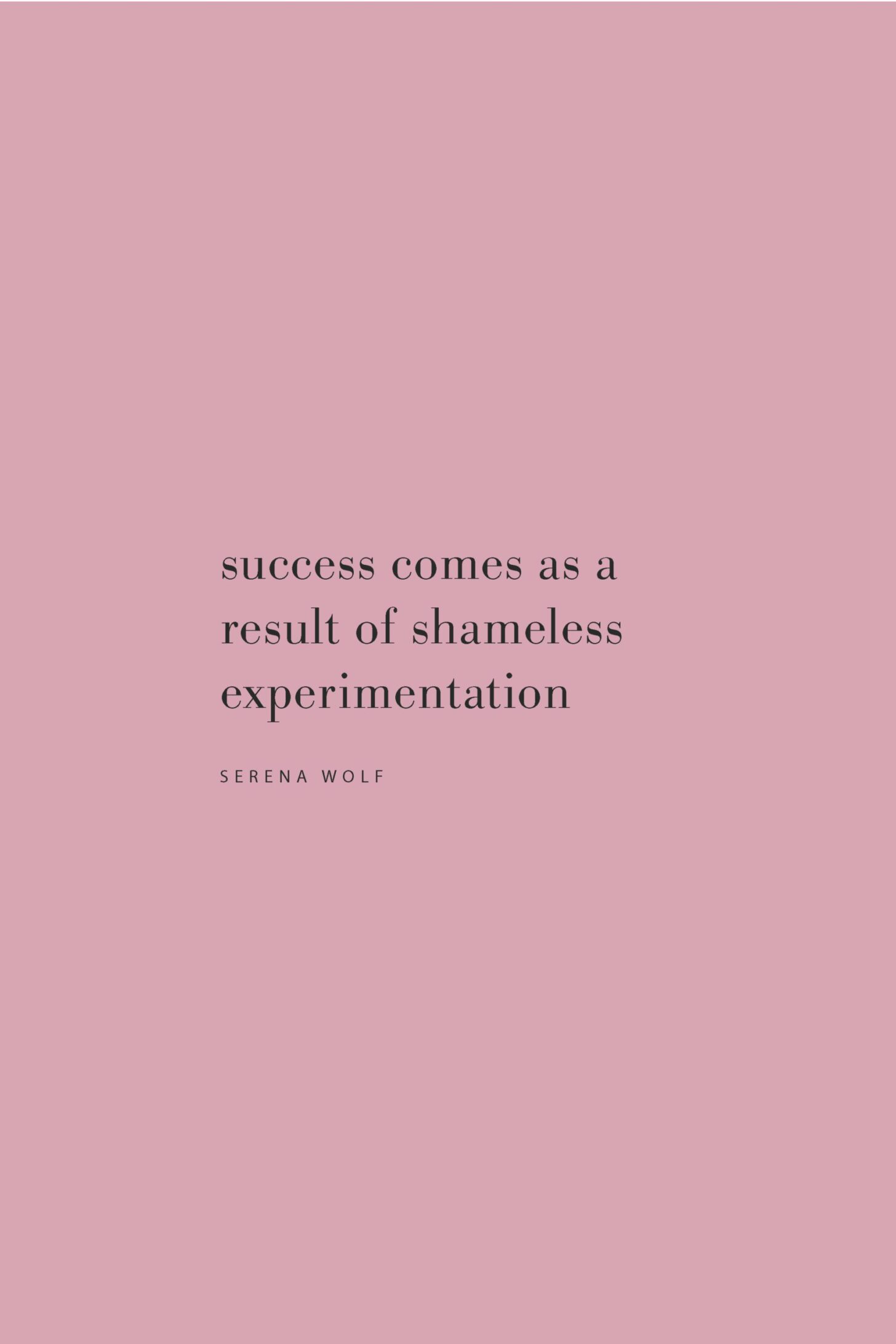 “Not everyone who works hard is successful, but if you do not work hard I can guarantee that you won’t be successful”.

People have to be willing to put in the time and have a little bit of faith in themselves as well as the process.

Shameless experimentation without fear or expectation is the way forward.

Try smaller experiments in your professional or personal life, because what’s the worst that can happen?

If it’s not succeeding in that specific area, in this context, the worse can scenario is just not that bad.

We do have a lot of hours in the day and if you are really interested in something, devoting some serious time and energy to it, regardless of whether it’s embraced by people or not, that it was it is.

Part of perseverance and creative fulfillment all boils down to doing things that make you feel the most like you.

Part of why people are so afraid to experiment is because we do attach an expectation to it.

Sometimes the reward is just the experience. 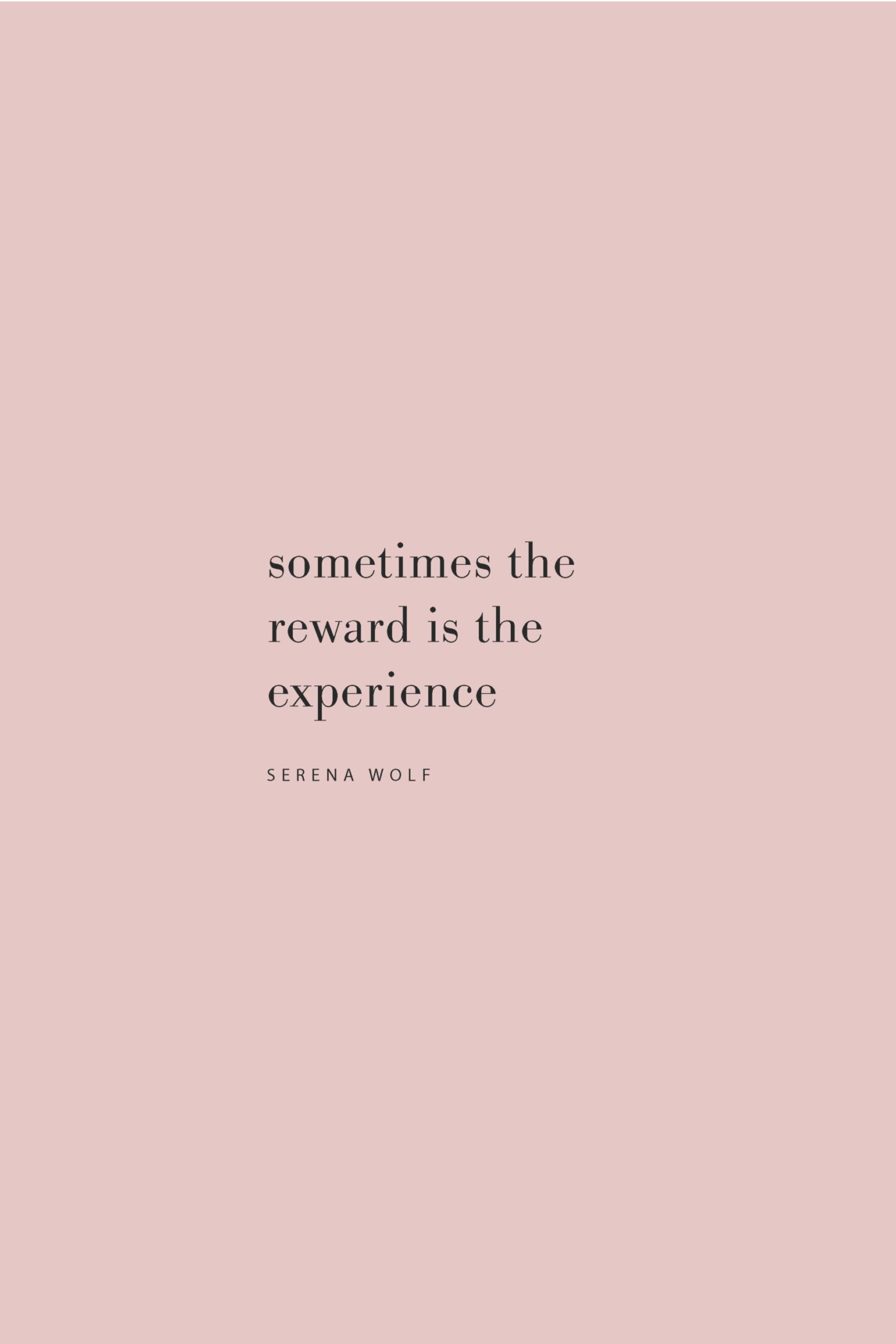 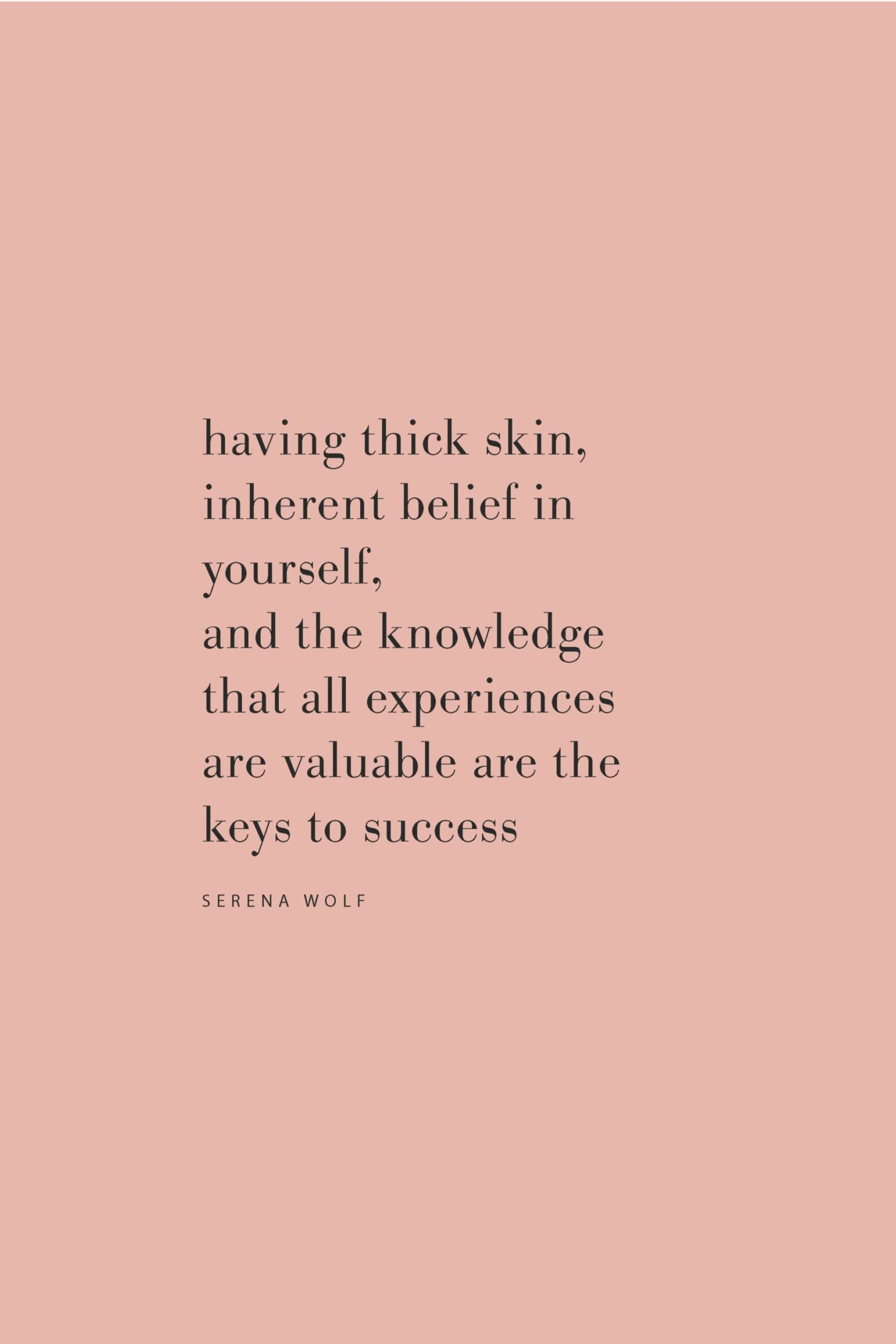 Even after Serena ran into failure, she realized that everybody is wrapped up in their own business anyway.

It was so liberating to know that she could put herself out there, fail, and then get out there the next day and keep on keeping on, planning the next thing.

There are tangible things to learn from these failures.

It’s having thick skin, inherent belief in yourself, and the knowledge that all experiences are good experiences is just a beautiful thing

Serena’s anxiety pools in the quiet times when she’s trying to figure out what’s next.

Knowing it’s a phase is somewhat calming, but she’s working on catching up right now.

You can live a full and happy, fulfilling life with anxiety.

You can be a highly anxious person, and that doesn’t mean it’s fun all the time, but that’s not going to preclude you from doing all these amazing things.

The language people use around anxiety needles Serena.

Why do we use the word struggle? Or suffer?

What if we said managing or dealing with?

We need to reframe how we discuss anxiety and mental health in general.

If we have more conversations about the fact that there are endless incredibly happy, successful, thriving people with anxiety and other mental health issues, then people wouldn’t feel like they couldn’t talk about it if they wanted people to think they were happy and successful.

If we had more conversations and made it less stigmatizing, people would realize that it’s not a doom-and-gloom struggle every day.

Among a lot of people out there with online platforms like Serena’s and Robyn’s, anxiety is a common trait.

It’s about managing it, but a little bit of it helps make things happen.

Making things happen and pursuing your purpose does not require that you be free of mental health concerns or barriers.

It’s about working with what you have and making the most of it without fear or expectation but with shameless experimentation.

“I think health and happiness are synonymous. I think being healthy is being as happy as you can be in your day to day life, in all areas, including what you eat, how you move, who you interact with… I made a commitment a few years ago to get happier and I think that has bled into every area of my life and made me physically healthier, mentally healthier”. 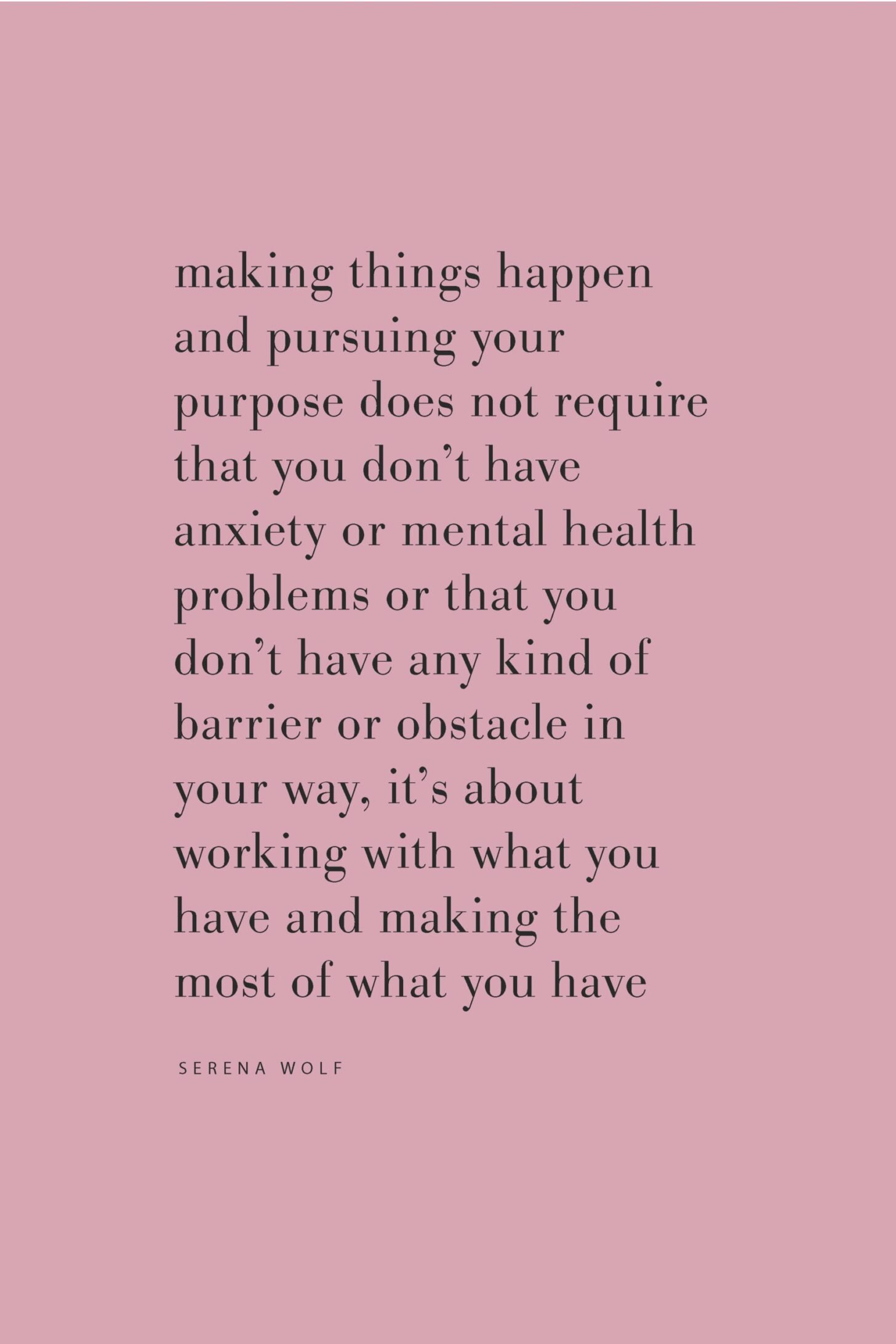 How to Harness the Power of Daily Awareness with Lalah Delia

The ONE Thing I Do Every Sunday: A Peek Inside My Self-Care &amp; Productivity Routine