In this episode of The Feel Good Effect Podcast, we’re talking with Shola Richards about kindness extremism.

Shola describes the power of treating others and ourselves with more kindness and how to show up a little more for each other.

This year has caused Shola to make some real decisions about the direction of his life and redefine success as well as what it means to be healthy.

Not even a year ago, Shola was traveling the world and headlining huge events.

Come mid-March, the trajectory of his business fell apart.

When it came to redefining himself, he realized he had defined himself by things that really didn’t matter that much, like the number of followers he had on social media and the size of the crowds he spoke to.

Now, Shola stands in a place of peace and unshakeable self-belief.

Winston Churchhill said, “never waste a good crisis”, and Shola finds himself in a better place as a result of this current crisis.

When everything changed in March, Shola had events scheduled out through the following year, events he was counting on to make his living.

It was horrifying to have the events each get canceled, one after the other.

He was initially depressed, but then reflected on who he was.

The problems he was trying to fix before this year didn’t disappear, he just needed to serve them in a different way.

Instead of validating his internal dialogue of imposter syndrome, consistently, his mantra is, “I belong in any group that I walk into”.

These two intentional practices, being mindful of the things he allows into his mind and the things he says about himself have allowed him to get focused on who he is and how he wants to show up.

There is pressure to consume all of the information and stay informed.

But how is that working for everyone?

If you’re needed four glasses of wine to go to bed, or if your mental health is affected in some other way, or really if it’s not sustainable, maybe it should be revisited.

If we really want to be in a place of informed without marinating in the awfulness of 24/7 news, consider choosing one time of day to go to your favorite news source and scan headlines.

Allow yourself to click on one headline and read the article.

Read it, and be done with it; it’s 5-minutes out of the day versus hours of drained energy.

People who suffer from imposter syndrome, more often than not, are high-achievers and they tend to be hyper-aware of what they don’t know.

To interrupt the spiral of negativity associated with imposter syndrome, Shola asks himself out loud, “Is this useful?”.

It interrupts the unhelpful pattern and invites a replacement that is useful and helpful toward his goals of being a kinder person to himself and others.

Being a parent now

As of mid-March, Shola hasn’t gone anywhere that wasn’t a few miles away.

His wife leaves for work before their two daughters wake up, so it is just Shola and the girls at home during the day where he is managing his businesses while his daughters are in Zoom classes.

Shola has observed parents going to a really negative place rather quickly, being really hard on themselves.

It is impossible to work full-time, parent, and be a part-time teacher simultaneously; these things weren’t meant to be done simultaneously.

It’s not hard because you aren’t good at it. It’s hard because it’s impossible. That’s an important distinction to make.

Self-kindness during this time is so essential.

The 6&6 rule is a super simple mantra that Shola shares with his coaching clients.

Little changes can have such a huge effect.

Thinking about something you’re worried about, ask yourself, “is what I am worried about right now, will this be a big deal six months from today?”.

If the answer is no, do not spend any more than 6-minutes of your time worrying about it.

We so often allow ourselves to persevere on things that looking back aren’t actually a huge deal.

Spend your mental energy on the stuff that’s going to be a big deal six-months from now.

One reason we beat ourselves up is because of social media.

Everyone is posting their highlight reel.

You can find a snapshot during your day in which everything looks perfect, post it, and everyone would believe that you’re rocking it, even though the entire rest of the day is complete insanity.

Focusing on the highlights of others makes it really easy to think that you’re unable to do or live up to a highlight-reel world.

Getting to where he is

People have this idea when it comes to starting a business, writing a book, etc. that once they feel confident, then they’ll do the thing.

But it is completely antithetical to the way it works in the real world.

The way it works in the real world is that you have to do the thing first and confidence follows.

When Shola was thinking about starting a business, he started it with the mindset that he would figure it out along the way.

He was uncomfortable, made some cringe-worthy mistakes, but then corrected them and figured it out.

To get there, there was a lot of stumbling, a lot of mistakes, but also self-kindness along the way.

Eventually, he knew that he wanted to have a business focused on changing the way we treat each other at work and outside of work.

He hopes his work is meaningful in useful, and ideally changes the world in the process.

Equity in the workplace is something he will always fight for.

The world needs to be a place where we are taking care of each other.

Shola’s goal in creating his business is to positively change the world by changing how we treat each other at work.

When you’re talking about 60 million people dealing with toxic workplaces, it’s a lot to unpack.

If you are going to be working with other humans, it makes sense to have the skills to do that in a way that doesn’t destroy them with your presence in the room.

Shola’s work is focused on both individual-level behaviors and structures, as they both matter.

The organizational work around creating environments in which toxic behaviors cannot thrive, however, is what is more enriching, more powerful, and more sustainable.

It’s tough to turn one person around because they believe in the effectiveness of their behaviors and are being rewarded for it.

Shola wants to create a culture where that type of person will not thrive because enough people will call them out, demand that they change, and management will not support the behavior.

That’s how we get real, systemic change within an organization, but it does take some time.

The responsibility is so often just put on individual people, but that’s not going to work.

We need to do this at a higher level.

It’s less concerned with fixing people, and more with creating an environment to not allow toxic types of behavior to be accepted.

A small shift for big changes

You can show up at your place of work in a way that actually makes the environment better, versus a harder place for people to be.

Commit to leaving every single thing you touch and everyone you touch a little bit better than when you found them.

Commit to giving out your hire self at work every day, aka, the person you said you were at your job interview.

If you would never dream of saying something at a job interview, don’t do it at work.

How to show up without being destroyed by others.

After George Floyd was murdered, Shola wrote an article called Why I Never Walk Alone, which quickly went viral.

As a result, a huge influx of people came to his social media pages and he dealt with a lot of racist, hateful, people.

At first, he wanted to end his social media presence, but he realized they were real people and he didn’t want them to drive him off of his platform.

He’d rather deal with the stress of online hate than throw out the good stuff that makes the world a better place with it all.

Toxic people will always be here, but they are not in the driver’s seat – you are.

Hurt people hurt people, and you can send them love and empathy but you can also send them away.

I picture a Venn diagram of three circles: physical health, mental/emotional health, spiritual health. The center part where all three circles intersect, that little space there, that is what it truly means to be healthy.

Shola Richards is a dynamic keynote speaker, the best-selling author of Making Work Work, and Go Together, he’s an in–demand workplace civility expert, and he is a prolific writer with a passionate worldwide following. His articles and wildly-popular Monday morning “Positivity Solution” email series have been read by readers in over 160 countries, and his work has been featured on the Today Show, CBS This Morning, Forbes, Black Enterprise, Complete Wellbeing India, Business Insider Australia, and in numerous other outlets all over the world who recognize him as an authority on workplace happiness and engagement. 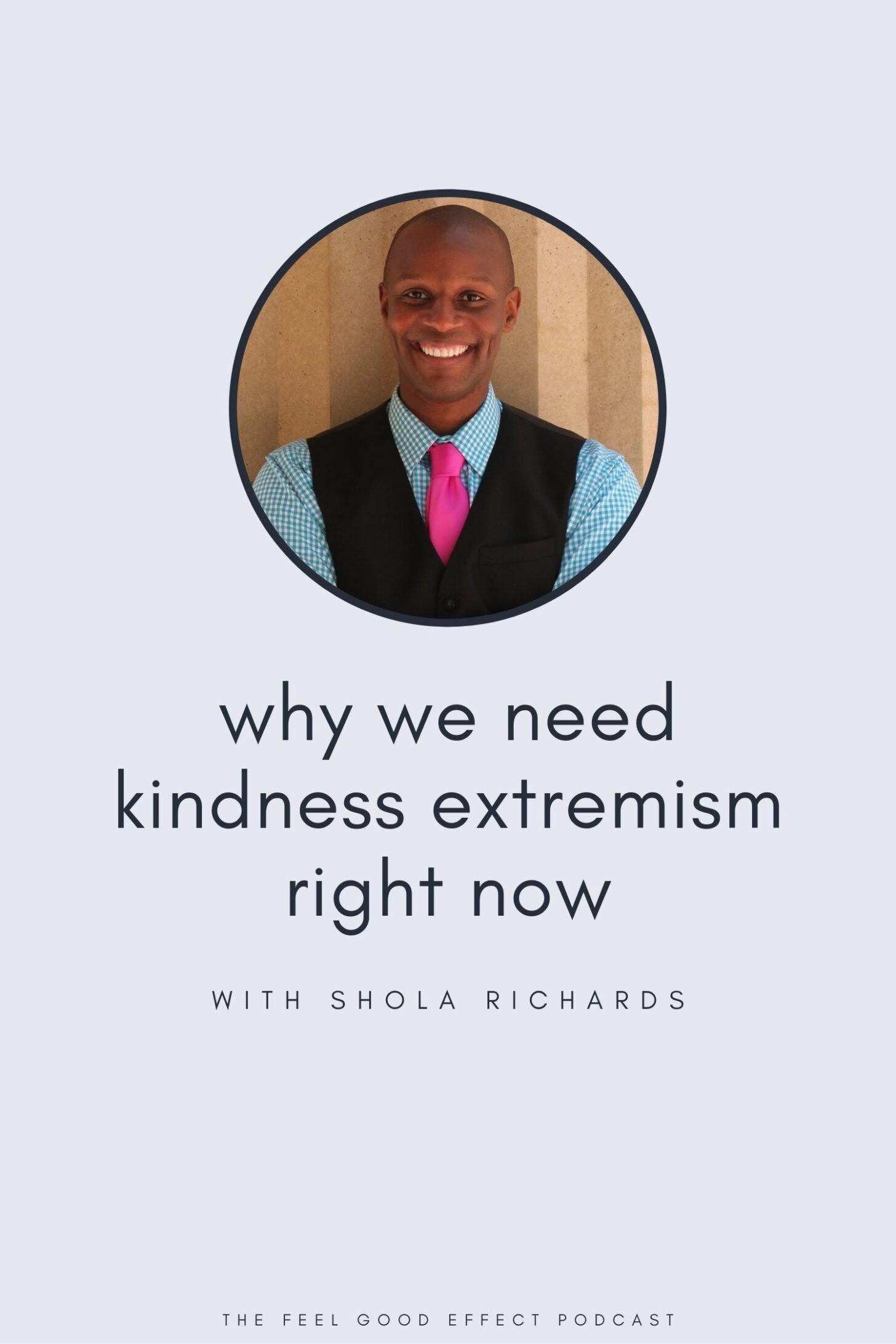 « Previous PostWhy You Need to Be Exercise Snacking
Next Post » An interview with Dr. Shauna Shapiro of Good Morning, I Love You and the simple mindset shift that can change your life