We are talking about a different kind of goal-setting today, one that will allow you to go after big dreams and infuse daily joy. 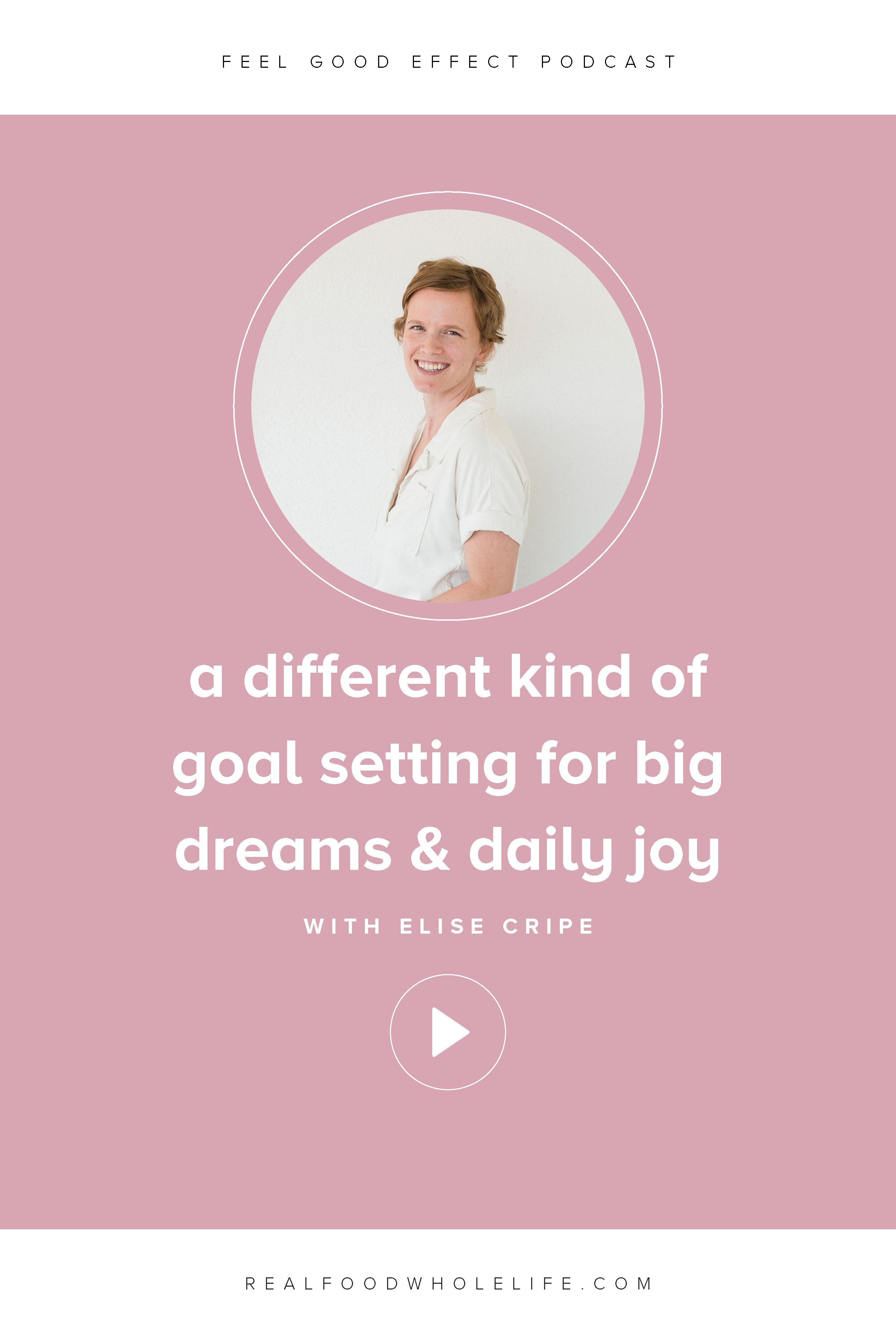 Today we’re talking with Elise Cripe, author of guidebook to goal-setting, Big Dreams, Daily Joys and founder of Get to Work Book.

This conversation is full of tactical tips and strategies as well as mindset discussion around what it means to set goals.

On what led Elise to write, Big Dreams, Daily Joys:

Elise studied business and marketing in college, where she envisioned working for a big company and climbing the corporate ladder.

But she ended up working at a paper store, Paper Source, where she got to do her favorite thing as a job, crafting.

At that time, Elise had a blog where she shared a lot of her different projects.

Goal setting was woven into the crafts she was doing and the way she was sharing her projects online.

It wasn’t until Elise spoke at the World Domination Summit in 2014 that everything came together and she realized goal setting was her job more than crafting was.

At that event, she talked about how much she loved setting big goals, sharing them publicly, and working towards them.

It helped something click for her and she realized that this was what she wanted to do.

Shortly after, Elise launched her Get to Work Book, her planner business– it’s a normal day planner with a lot of goal-setting features included in it.

On how Elise is changing the goal-setting genre:

When it comes to goal-setting, a lot of people struggle with finishing.

It’s not necessarily about being creative, it’s about getting the work done, or even working on it in the first place.

Elise works for herself now, so she does set business goals, but her work is more on the creative and fun challenges.

A lot of her book is talking about how, yes, there are things you have to do, but how can we make those things a little more fun? What can we add?

That’s what she loves to help people explore: Can you try a new hobby? Can you work your way through a cookbook and have fun with it? How can you bring more, interesting excitement to what you’re already doing?

For Elise, it’s through challenges and goal-setting.

When Elise started blogging, it wasn’t quite yet an industry, versus now when it can be a career.

She always liked writing and thinking through her processes and then sharing just became an extra element of it.

But now, there’s a struggle against the pressure.

We see people who are already amazing poets or artists, and the comparison becomes a hurdle in the way of trying new things.

It’s not easy to shut it down and do your thing.

“Everyone starts at the beginning… getting good or getting adequate at something starts with trying.

We can’t wait until we feel great.

We have to do it first.” 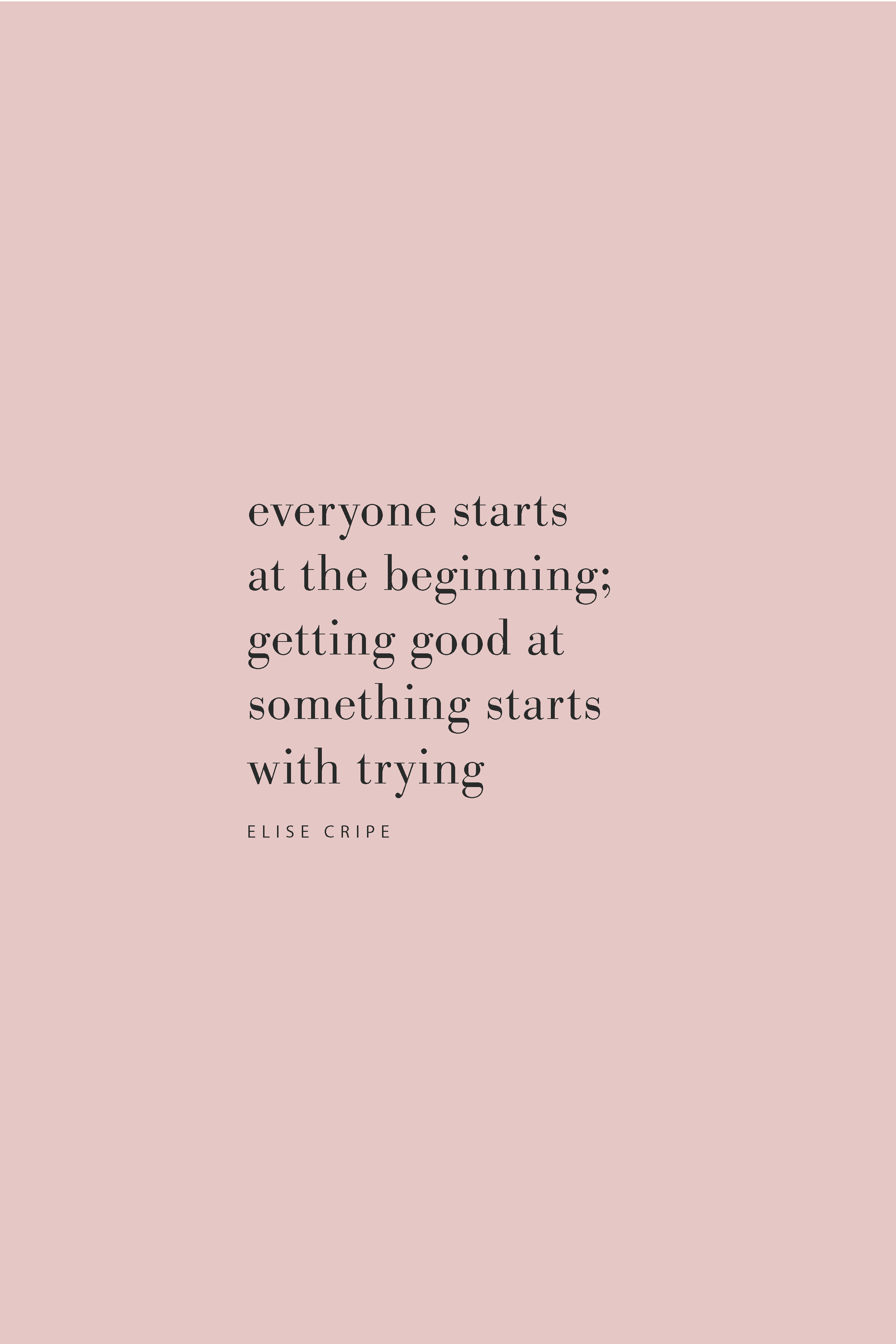 With goal setting, the meaning of it, the “why” you’re doing it is coming internally, not from your friend or competition, it’s something that you really want to do.

If you can’t jump into the ring, maybe it’s because this thing isn’t really lighting you up.

Maybe there is something that you’re not good at the beginning but you’re going to love it enough that it can help you get over that hump.

On sticking with something at the beginning:

Something Elise talks about in her book is this idea we have that what we’re doing should be inspirational and feel really good, but sometimes doing the work doesn’t feel good because you’re not good at it yet.

Then, when we sit down to do it, it’s hard, and we think it can’t be right– we think we’re doing it wrong, so we go look for more inspiration.

Part of the process is accepting that when it gets hard, that doesn’t mean you shouldn’t be doing it or that it’s not going to get better.

In the beginning, your work is not nearly as good as you want it to be.

You have two choices: you can quit and go buy the stuff that you want, or you can really push through, and continue pushing for a very long time until you get to the point that your taste level is at.

On not beating yourself up because you aren’t where you think you should be:

You can set a goal, but you have to check in along the way.

The check-in isn’t to make you feel good or bad, it’s just an assessment of where you’re at.

Where you’re at is just information, it’s not something to let get in your way or feel too emotional about.

“Look for the small improvements… Recognize those successes and let them be a big deal.” 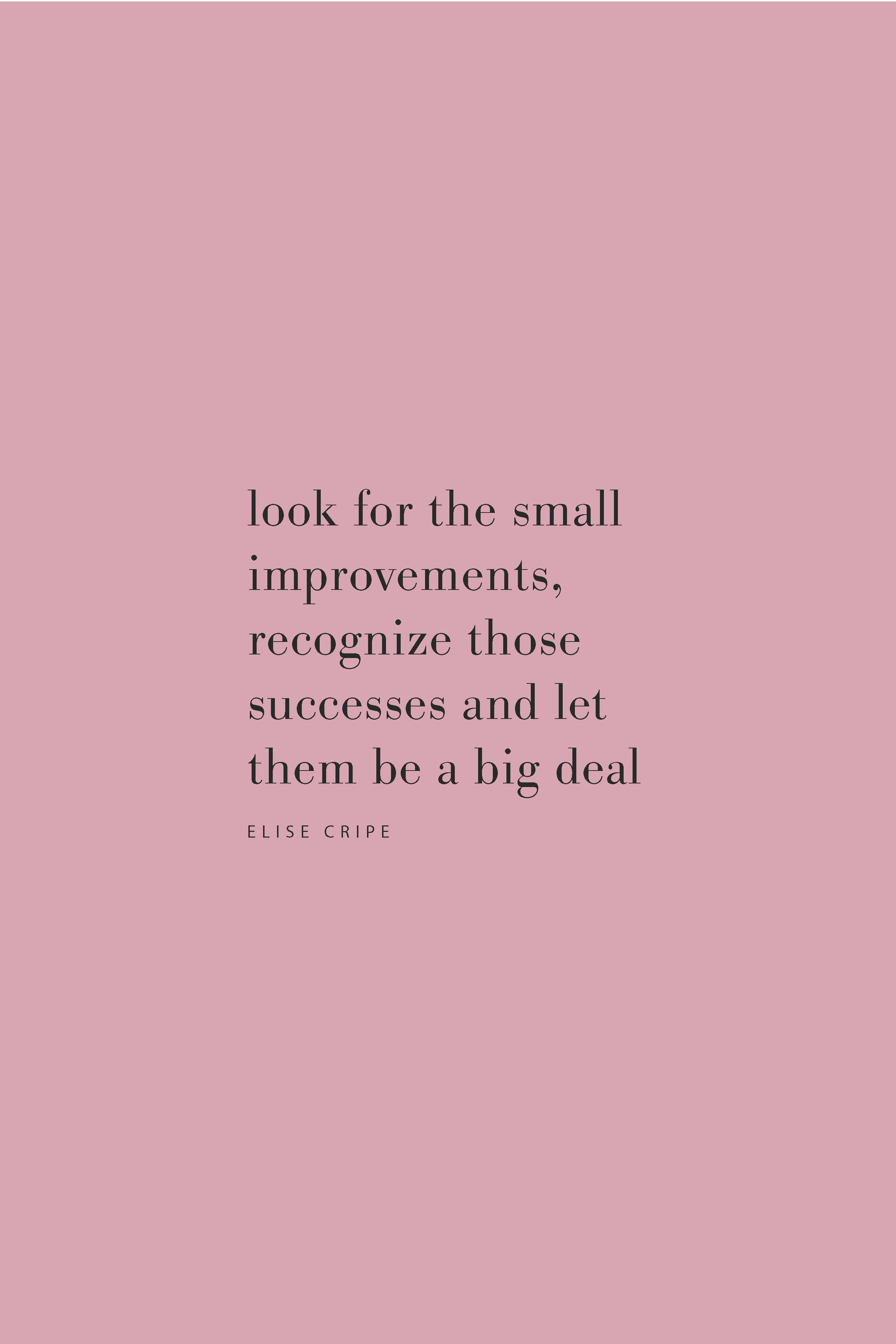 People don’t always like to shrink their goals, but shrinking your goal temporarily is where you can really see gradual improvement.

“You can get so much further when your finish line isn’t miles away.” 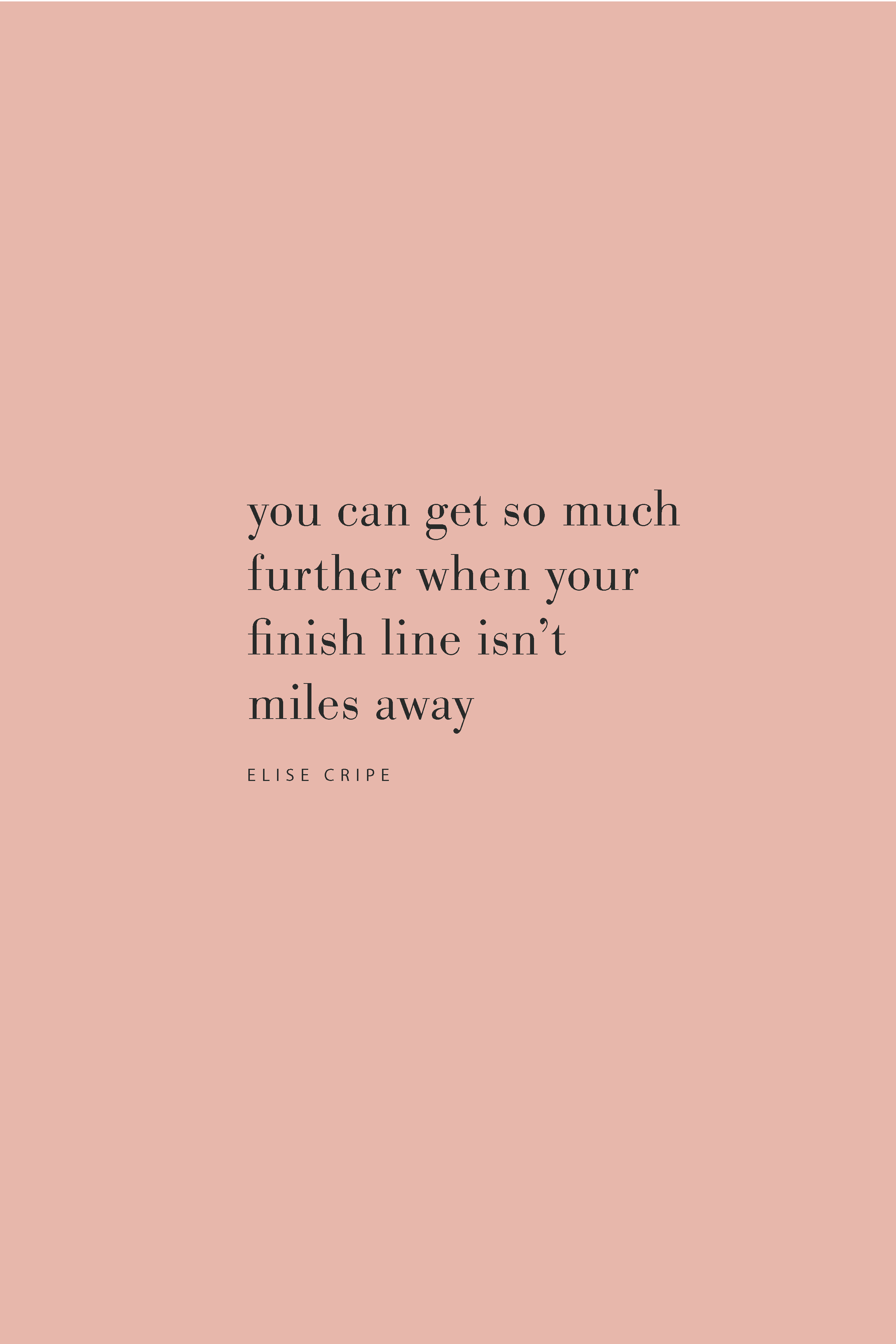 What Elise has learned about goals from creating and using her Get to Workbook:

Making the planner work for you

Elise thinks of planners and to-do list as tools, rather than something she spends time to make look fancy.

She notices that other people do like to spend time making their planners look nice, though, and there’s no wrong way to do it.

Elise is a huge fan of having 3 Action Items that she makes a priority for the week to come.

Everything else will happen, but those are her priorities and it helps her plan her time and build her week around those items.

Some of the pushback Robyn gets with her conversations on prioritization is that “everything is important, how could I possibly pick three things?”

When you’re working towards a goal, it’s important to be able to ask yourself, “what matters most? Where am I going to spend my time and energy on this day, this week, and moving forward?”

There are external deadlines, like something for your kid’s school, or a project due at work, or a party for a friend– things where other people are counting on you to deliver on a specific deadline.

Those things tend to become the default priorities for some people, but sometimes all of our time goes to that, to other people’s deadlines.

Something that can help is trying to keep track of where you’re time goes: actually sitting and rationally thinking about where your time goes in a day.

These things may feel so insignificant, but a lot of times the big answer is just adding up a lot of tiny tricks.

The mindset shift is from thinking it’s one big solution to it’s going to be all these tiny changes that stack up to create a different experience.

On white space around goals:

In her book, Elise talks about white space being the margin on the page– when you turn to a page in a book the entire page isn’t filled with text.

Instead, there’s a margin all around it so your eyes can rest and hen you know where the important work is.

Margins can be as simple (or difficult) as making sure you’re desk is always cleared off so you have a clean, open space to work.

Then, when things get overwhelming, you’re still on track to the goal you set.

Finding success by setting a goal and reaching it is very motivating, getting the ball rolling.

One of Robyn’s favorite quotes from Elise’s book is about nothing, “to claim nothing as the something that it is.” 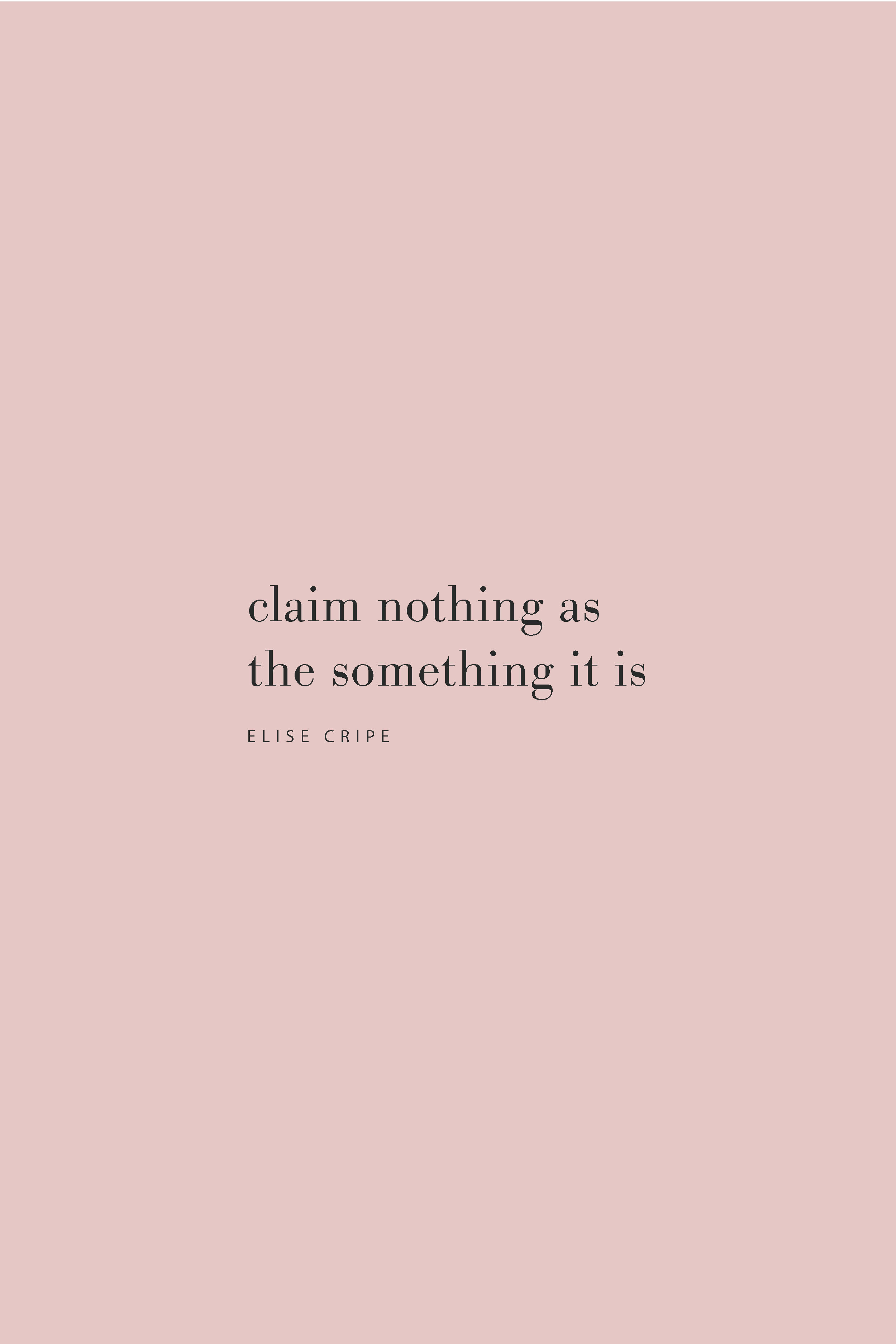 Get comfortable with the idea that you could do nothing.

What can we say no to, in order to say yes to this?

On the role of routines:

Elise knows that she tends to do better with structure.

She makes sure she schedules a time for things in her life, she doesn’t check her email on her phone, and makes sure she has time away from her computer.

For the habits that you’re trying to build into your life, trying to have that be at the same time every day is so important.

Skipping a day doesn’t mean you fail, you can catch up the next day.

This just means you’ve placed it in your day, it has importance and weight, and you’re trying to do that over and over again until it becomes part of what you do.

On Elise’s routines and projects:

When Elise goes to start her work, she always clears her space (even if it means just moving stuff from her desk to the floor).

When she’s feeling stuck, she tried to regroup by clearing her space and getting a glass of water.

When she’s ending her workday, she tries to make sure her inbox is clear.

Tips on controlling your inbox:

Coming up with some guidelines for yourself may feel restrictive, but it ends up creating freedom.

“Being where you’re at is great, but you have to be aware and be prepared to make small adjustments”.

Tune in to what feels good.

Create systems for what you care about and what works for you.

Elise is inspired that there are a million ways to do something right, and if we can think about that, it really opens it up.

“Being healthy is about being comfortable with who you are and acknowledging that where you’re at is good.”

ABOUT ELISE: Elise Blaha Cripe lives with her husband and two young daughters in San Diego, California. She has been sharing thoughts and DIY projects online since 2005, running an online shop of handmade goods since 2008 and in 2015 launched GET TO WORK BOOK, a day planner + goal setting journal. In October 2019, Elise’s guidebook to goal-setting, Big Dreams, Daily Joys, launches.

Get To Work Book

Connect with Elise on Instagram @elisejoy or on her blog

How to Prioritize When Everything Is Important

« Previous PostTransformation, Transcendence, and the Beautiful No with Sheri Salata
Next Post » How to Radically Simplify Your Morning Routine