Want to Do Less & Have More? Here’s How with Kate Northrup

Do you want to do less and have more?

You’ve probably heard that before, but I’m talking about actionable, specific, tactical things you can do to actually do less and have more– a revolutionary approach to time and energy management. 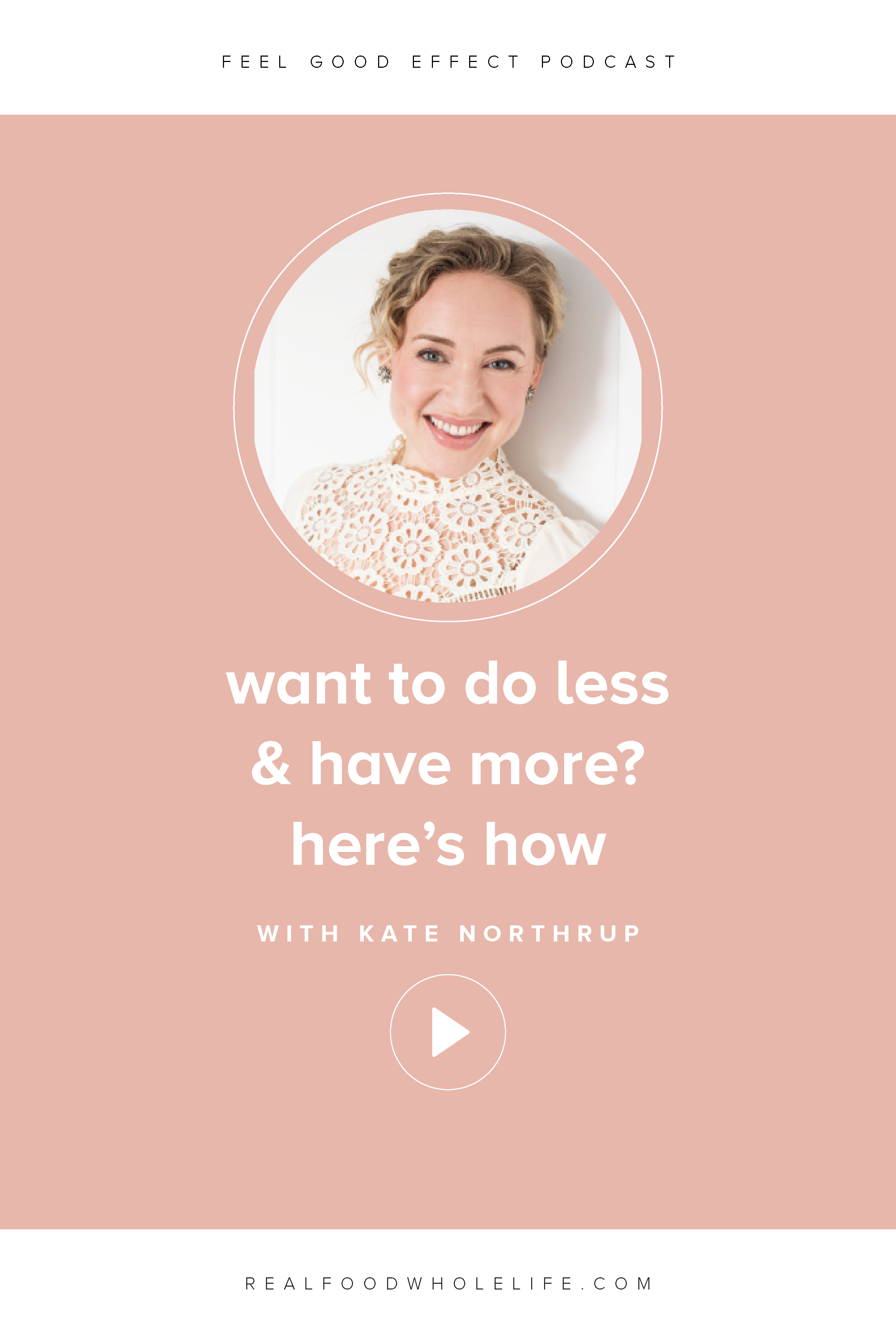 Want to Do Less & Have More? Here’s How

This conversation is with Kate Northrup, an author, teacher, and mother who is committed to supporting ambitious women to light up the world without burning themselves out in the process.

Listen on for her data-driven and soul-driven time and energy management practices.

On what led Kate to write, Do Less:

Kate’s pregnancy and first year of motherhood really knocked her on her butt.

She thought because she had always wanted to be a mother that it would be easy for her, but she was so tired.

Between the exhausting pregnancy, needing to cut her work hours in half, traumatic birth, postpartum anxiety, postpartum insomnia, and just really struggling, the first year was so hard.

Kate and her husband run their own company, they didn’t have access to parental leave.

Financially, they needed to get the same results, if not better.

A year after their child was born, Kate and her husband sat down and looked at their finances, realizing that they managed to make the same amount of money as before even though they had also worked less than half as much.

“If we could do that by accident, what if we did that on purpose?”

That is where the Do Less book came from.

When assumptions don’t quite match:

Kate had all of these assumptions about pregnancy, birth, motherhood, and work, and none of them matched her reality.

It was an incredibly difficult time for her, which contributed to her postpartum anxiety and insomnia.

She didn’t feel like a failure, but her controlling tendencies went into hyperdrive.

She thought that if she just tried harder, read more books, and followed the rules perfectly that she could figure out how to make being a mother easier.

She fell into a groove that had previously shown up in her life around controlling food.

She found herself in that very same mindset around trying to control her child’s sleep.

The way she was working wasn’t working.

She eventually had to let go and let things be out of control and let her baby be a baby.

She realized that it was already really hard, and she was only making it harder.

It felt really good to throw away all of the baby advice and take back her power.

But if we would just accept it the way it is, life would be a lot easier”. 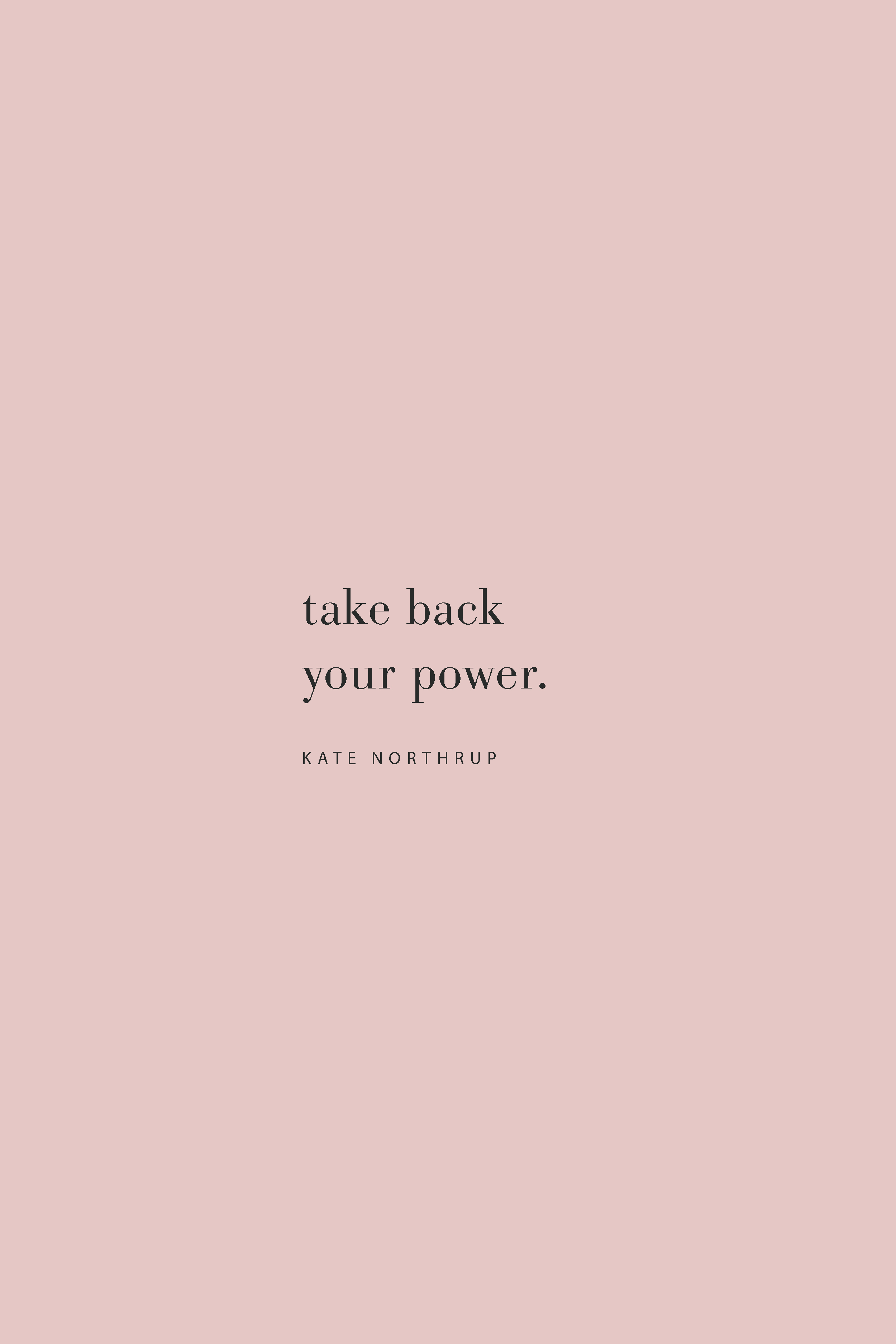 On how to create something that does work:

It’s somewhat individual for everybody, but there are a few common factors that Kate finds apply across the board and are really helpful.

Start by taking inventory of the support you have in your life and find what’s lacking.

We are programmed to think that if we are realizing we need help that we are weak.

We could all stand to lean on each other more. 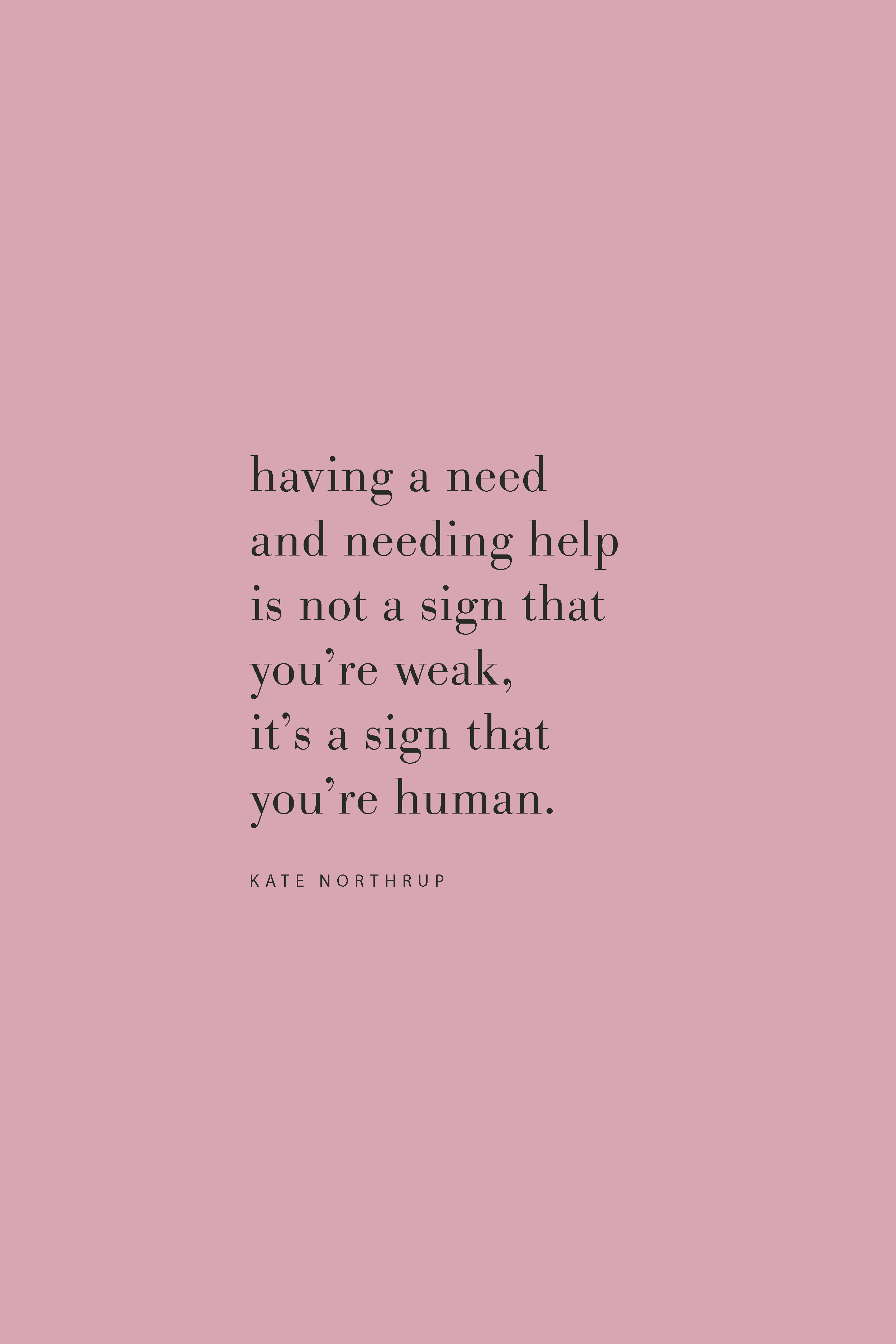 On having more by doing less:

Kate discovered a metaphor: she noticed that menstrual cycles match the lunar cycles as well as the four seasons, each being composed on four distinct stages.

She found that if she was able to listen to her body and use it as her own time management system, she could give herself grace and space and know that she was right on time.

“Nature never rushes but everything gets done” – Lao Tzu

The “do less have more” idea came from realizing that there are seasons and cycles that we’re working in; if we work with them as opposed to against them, the rest becomes productive, the pause is productive.

We are able to get more done in less time when we sync up our work with the timing in our bodies– when we give ourselves a break when we need it, we sleep when we’re tired.

And it’s counter to everything we’re told in a Western culture, where we tend to view things as linear, day by day, rushing.

There will be times of productivity and times of rest; sometimes what you think of as rest is actually productive.

Important to note: this is research-backed and all based on data.

There is significant data around the hormonal piece of cycles and productivity (males cycle in 24 hours where women cycle in 28 days) as well as findings that women (and men) are not designed to work optimally in a 47-hour workweek, which is the average in America.

Life happens in seasons and cycles, but we want to do everything all the time.

We live in a society that only celebrates visible doing and visible progress.

However, sleep is actually incredibly productive for organizing our hormones, organizing our memories, detoxifying, and digesting– so much happens while we sleep that is productive, even though from the outside it doesn’t look like anything is being done.

The “do less” philosophy: look at the places in your life where you think nothing is happening and you judge yourself, and instead, embrace all of the different kinds of progress that you’re making.

On the results people are seeing with Kate’s book, Do Less:

One example Kate received from a reader is that instead of rallying up her family for a weekend out just because it was sunny, she took the time to stay in, get some work done, and relax.

So, instead of acting in a way she thought she should based on what she thinks a sunny weekend should look like, she acted in a way that felt best for her body that weekend.

We’re often living according to something outside of ourselves.

Because the female brain is typically awash in estrogen, and estrogen wires the brain to focus on consensus and connection, women do a lot of external checking.

Instead of checking in with ourselves, we check externally with our family to make sure everyone else is in consensus and then we make a decision.

Kate proposes we switch it around, to a degree, because we’ve lost track of ourselves.

Give yourself permission to stay home on a weekend day.

Ask yourself: Is this giving me energy?

This is a different way to approach decision making than our culture promotes, but it doesn’t mean we shouldn’t try it.

Go through the different areas of your life, like your health, your relationship with your body, your spirituality, your romantic relationship, your families, your career, your finances, your friends.

Which one of the areas has the lowest score?

When our energy is being drained by mostly one area, it becomes an energetic drain, which will impact all the areas of your life.

“When we shore up the energy in one area, it actually enhances every other area of our lives”.

Kate likes to invite people to try these ideas in a playful way.

The concept of experiments feels more like “let’s try this out. You’ve tried it one way, but have you tried it this other way?”

It’s not about overhauling your whole life, it should be a playful, light invitation.

It also invites more of a scientific mindset— “try X and see if it works. If it doesn’t you can drop it, but if it does, you can keep going”.

Not working doesn’t mean you’ve failed; it means you’ve learned something and you can try another option.

On discovering what really matters to you & setting boundaries:

We think we know what matters to us, but it might not match up with how we’re actually spending our energy.

Figure out what matters to you, and then match up the hours in your day to that.

Look at your calendar with a list of the things that actually matter to you in hand (your family, your marriage, the health of the planet, etc.)

Line it up: does this match up with how I spend my energy?

If not, how can I make more space for the things I say matter to me? 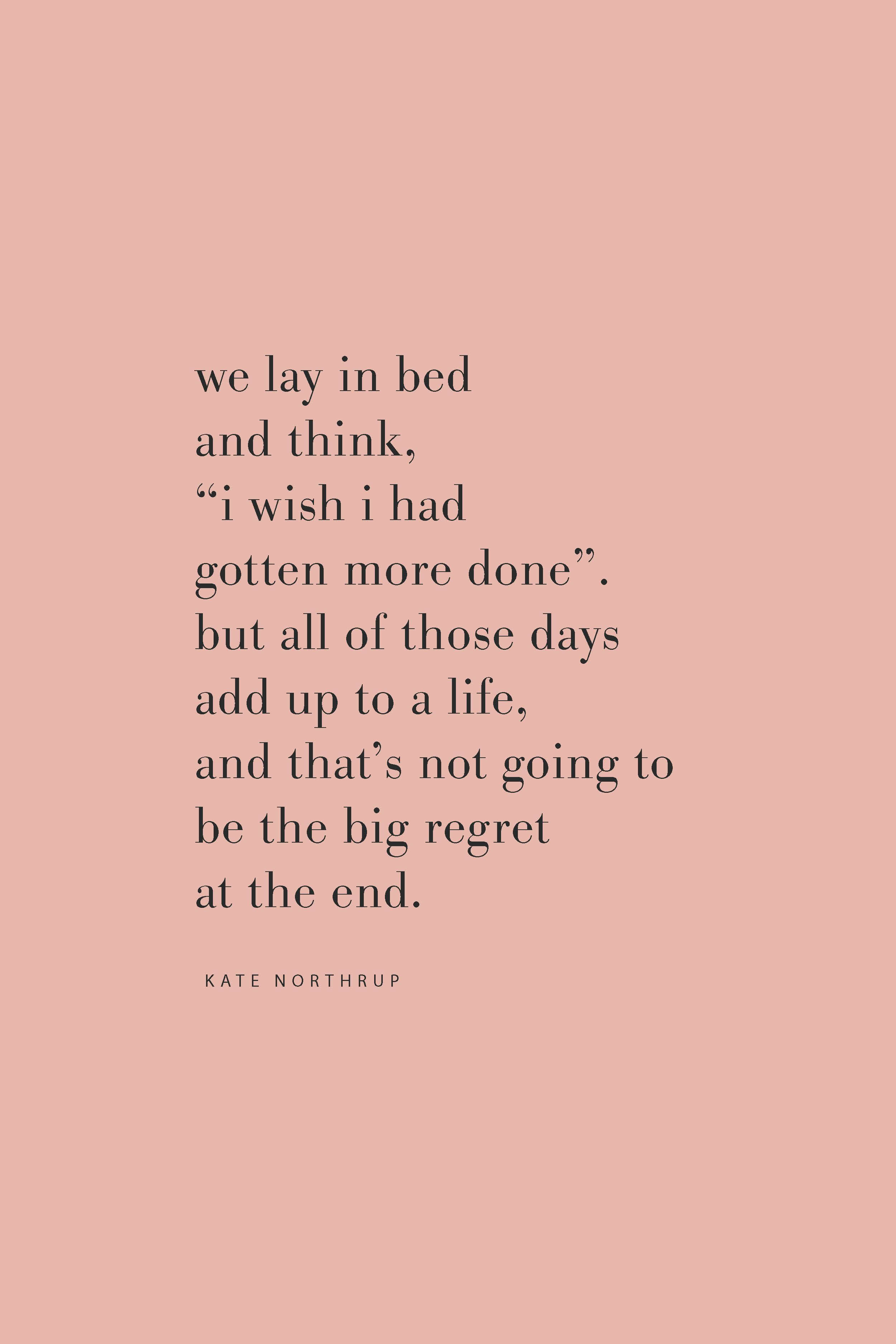 “We lay in bed and think, ‘I wish I had gotten more done’, but all of those days add up to a life, and that’s not going to be the big regret at the end”

Setting boundaries and saying no is a big part of that.

“We have to expand our capacity to be okay with other people not being okay”. 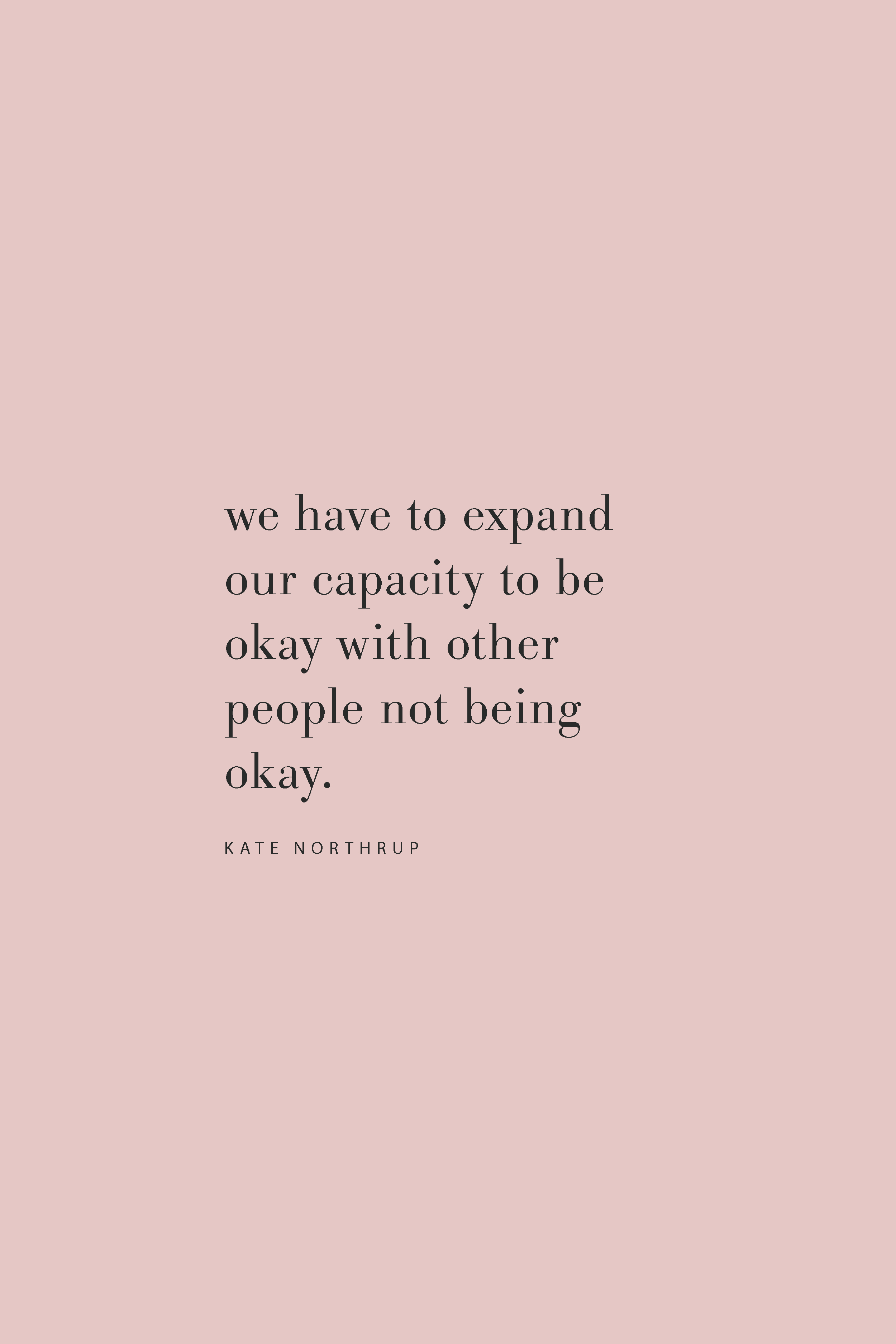 The idea of struggling with saying no because of someone else’s disappointment is a feeling explained by evolution.

There is a connection and a feeling in our bodies related to someone else’s wellbeing; evolutionarily, it is related to our own wellbeing.

Practice with small things and over time, you can be okay with other people not being okay in greater amounts; it takes little bits over time practicing over time.

Write it down: If I’m saying yes to this, what am I saying no to?

Kate has two young children, so she’s not launching her book in the way she might if her children were in college, or the way she did with her first book before she had any children.

She needed to honor the season she was in.

“To listen to your body and build a connection where you actually know, for yourself, what’s good for you”.

As an entrepreneur, bestselling author, speaker, and mother, Kate Northrup has built a multimedia digital empire with her husband, Mike Watts, that reaches hundreds of thousands globally. They are committed to supporting ambitious women to light up the world without burning themselves out in the process. Kate teaches data-driven and soul-driven time and energy management practices that result in saving time, making more money, and experiencing less stress. Kate has a membership of over 1,000 entrepreneurs called Origin® Collective that’s about infusing more feminine energy into your business and reclaiming your time, and she has also helped over 5,000 students heal their relationship with money with her signature Money Love Course. Her first book, Money: A Love Story, has been published in 5 languages, and her second book, Do Less: A Revolutionary Approach to Time and Energy Management for Busy Moms, is now available wherever books are sold. Kate’s work has been featured by The Today Show, Yahoo! Finance, Women’s Health, Glamour, The Institute of Integrative Nutrition, Wanderlust, The Huffington Post, and more. Kate and Mike live with their daughters in a cozy town in Maine.

Connect with Kate on social media:

The Kate & Mike Show: All things Life, Love, and Business

Paring Down to Create More, with Melissa Coleman

How to Get Unstuck and Simplify, with Ashley Gartland

« Previous PostWant to Get Better at Dealing With Change? Here’s How, with Jenny Blake
Next Post » Want to Find Your Artistic Voice? Here’s How with Lisa Congdon