In this episode of the Feel Good Effect Podcast, we’re talking with Sebene Selassie about real connection and finding a true sense of belonging. In this interview, we talk about belonging as truth, its relevance to current events, and how you can foster belonging in your life.

You Belong: A Call For Connection

Sebene Selassie is the author of the recently published book, You Belong: A Call For Connection.

Describing herself as a “nerdy, Black, immigrant, tomboy, Buddhist, weirdo”, Sebene writes about belonging because she has been searching for it her entire life.

Whether or not one has this many marginalized or traditionally excluded identities, so many of us don’t feel like we belong to whatever mainstream culture tells us we should, whether that’s how we look or feel.

Sebene’s exploration and aspiration is to allow readers to identify the places in which they feel like they don’t belong, as those are really the entryway into belonging.

Belonging: to be the longing of wanting to belong is part of the process and we find our belongings by uncovering the places in which we feel like we don’t.

Belonging is an expression of life

Belonging is the truth, it is our birthright.

We are not separate; we are, like everything else, part of nature, despite the way we talk about nature as something separate from us.

Science and physics tell us that there is no separation between us on a cosmic level and spiritual traditions tell us about the interconnection of life and existence.

It is society and culture that create a sense of separation and push those ideas of not being enough, making us feel like we don’t belong, but that is not the truth.

Belonging is already a part of life, it’s the expression of life. 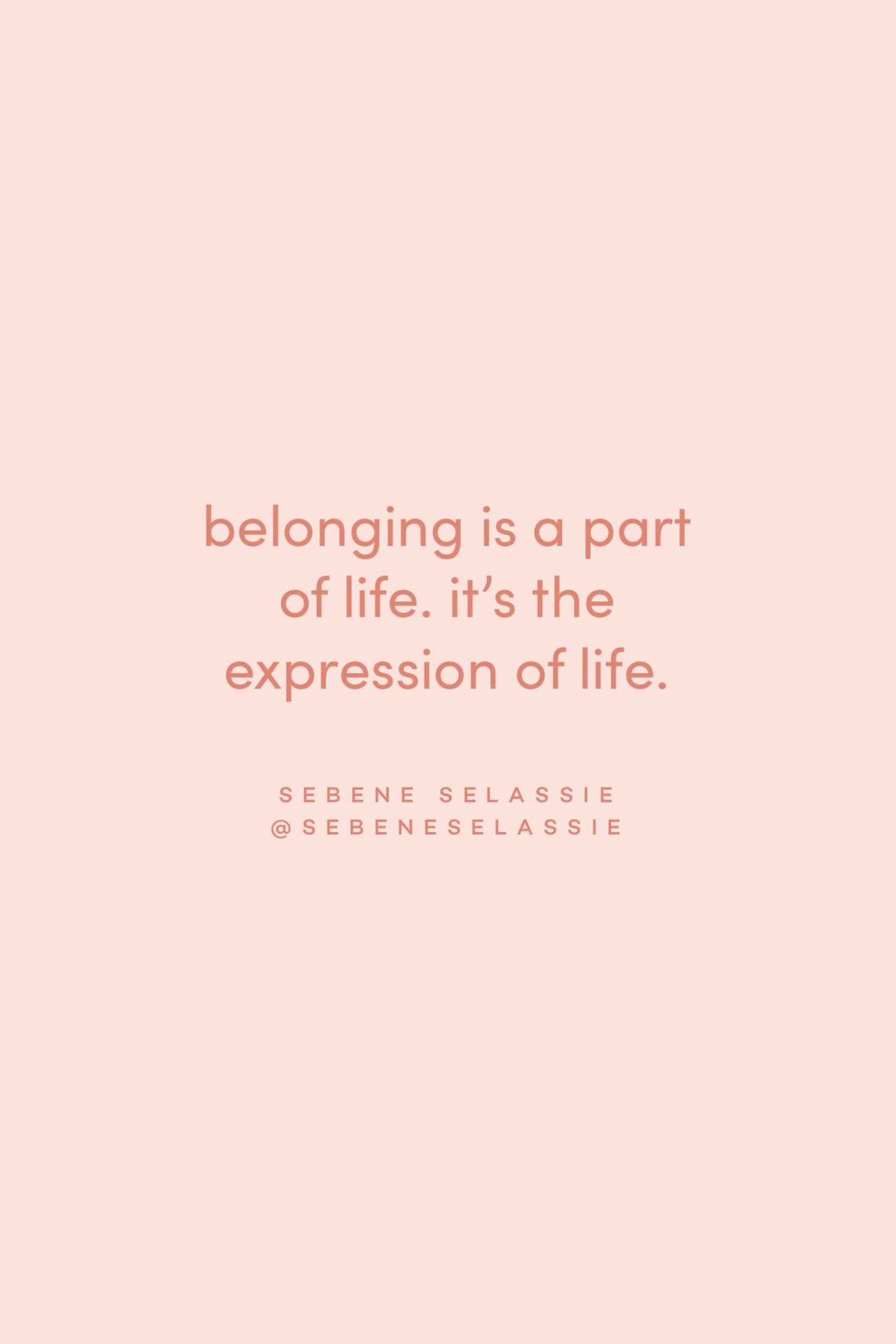 Why is belonging important?

The delusion of separation is the root of so many (if not all) of our problems.

Indigenous wisdom and science both tell us that belonging is the truth.

We see it in our biology, through mirror neurons, how we mirror the realities, emotions, expressions of people around us.

The domination and separation patterns are cultural and social, but not the truth of our reality.

It’s important to understand these very spiritual, scientific, rudimentary truths of belonging and interconnection in order to solve the social issues.

If we only tackle the social issues of separation, as we’ve seen during the pandemic and uprisings around the movement for Black lives, these divisions will continue to wreak havoc and are part of that delusion of separation.

However, many of the uprisings happening during this time are rooted in nonviolence through the recognition of interconnection.

We’re not going to solve these issues with the same patterns of domination and separation that created them.

Relevant to this idea is the prison and police abolition movement, which is asking that we not use these same systems of oppression to then remedy the issues we are seeing.

Instead, we can look toward systems of restorative justice and healing, rather than punitive demands.

Come back to the root knowing of our interconnection and when we harm anyone it harms all of us. 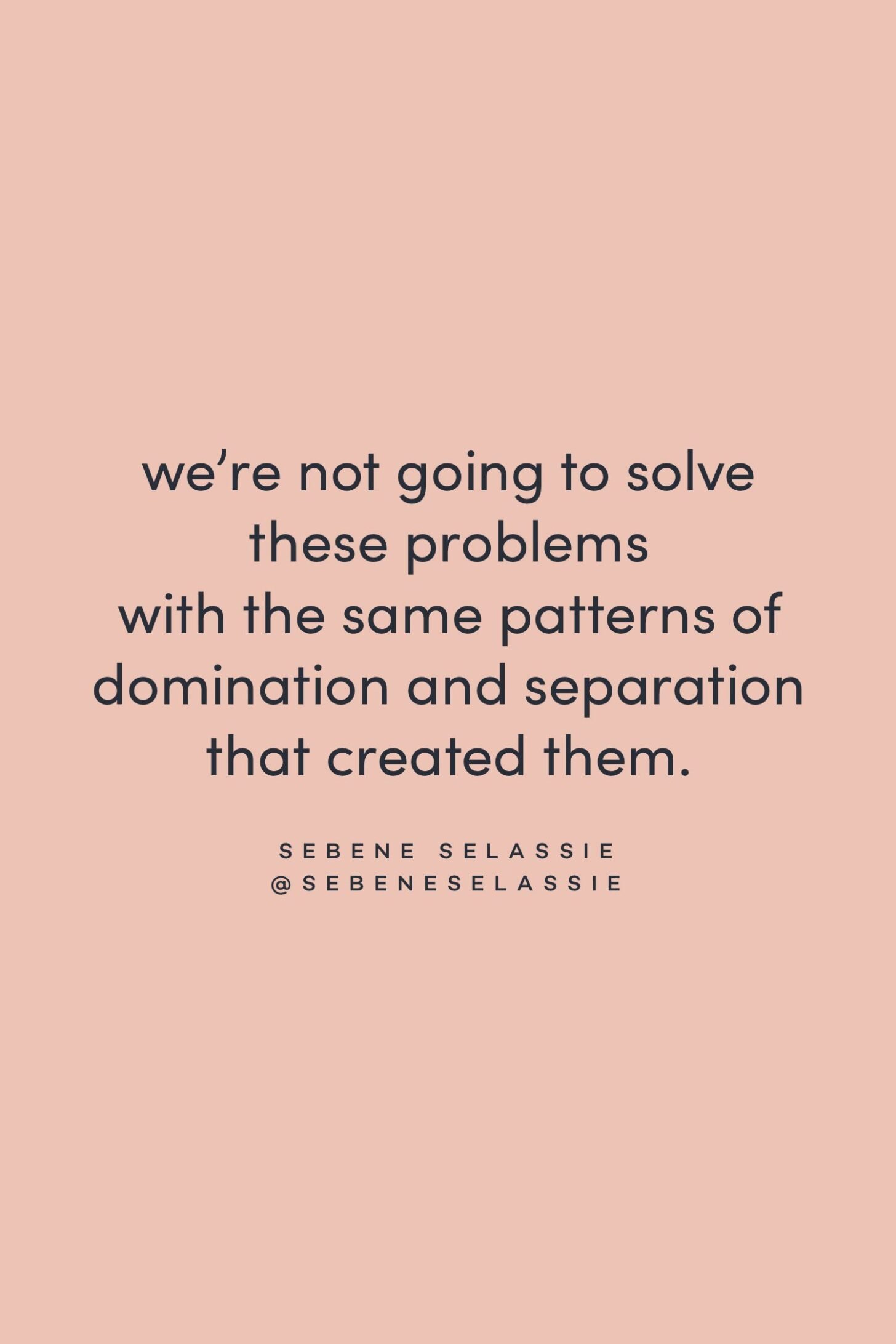 When it comes to social change, belonging is both at an individual and collective level.

As a meditation teacher, Sebene comes at it from an individual level to work with others on their internal practices.

Different from what tends to be the focus of western meditation, though, is the focus Sebene puts on the relational aspect.

We tend to view meditation practices as internal processes, but Sebene considers that the internal connects to the external.

We have to start with ourselves because without inner change there cannot be outer change.

There is a lot of talk about change at a system-level, but systems are made up of people, so the systems need to involve internal change as well.

We see this with the greatest movements of our modern time, for example, Gandhi, Martin Luther King Jr., and Nelson Mandela, who were all people of color and all deeply spiritual people bringing individual integrity into the wider systemic change.

It’s not possible to have true systems change without internal processes as well; we have to start there.

Separating systems from the individuals within it makes it easier to study, but just because something is easier to study doesn’t mean that’s the way it should be done.

On the flip side, there are critiques that with western meditation practices we are asking individuals to make changes even though the systems may not.

Successful change involves the people and the system.

The paradox of the absolute and the relative

In Mahayana Buddhism, the absolute truth is that we are all interconnected and we are not separate.

Even in scientific terms, all of our known physical realities of the universe started from a tiny point from which everything expanded.

We are all stardust.

There is also a relative truth, which describes that “I am me, you are you”, that we have separate experiences and separate consciousnesses and there is material reality around us.

The thing about the absolute and the relative is that they are both true; they are called the two truths.

We see this fundamental paradox on a social level, too.

We are not separate.

Our well being as a species depends on harmonious existence.

At the same time, we have separate political views, opinions, and values- can we hold both of those to be true?

I am interconnected with someone I disagree with, who I don’t like, who I actually don’t even want in my life, but I am also fundamentally connected to them.

Fitting in versus belonging

To Sebene, “fitting in” describes the compromises made to not feel discomfort in a space.

For example, limiting the full expression of who one is because it doesn’t quite match the space.

This is a familiar experience for many who do not feel welcome by parts of the dominant culture.

What kind of damage am I doing to myself in the system by trying to fit in versus belonging?

The importance of practice

Most of us are lost in our conditioning, including our thoughts and our emotional and physical patterns.

We can reflect on what our conditioning is: have I been patterned to have a lot of anxiety, depression, withdrawal, be aggressive, or be overly-assertive?

Ground yourself by finding a way to build a contemplative practice.

Sebene offers mindfulness meditation to be aware of what’s happening in the heart, brain, and mind while bringing clarity and kindness to it.

By allowing things exactly as they are, joy and freedom arise.

It’s not by pushing away feelings of anxiety or upset that we encourage the opposite.

A spiritual bypass describes prematurely reaching those states without a full release.

If belonging is our natural state, we don’t have to do anything to make it happen, instead, we have to uncover it.

Feeling good is not good vibes only; it doesn’t always feel good in the moment.

It’s not about changing what we’re feeling, it’s about having a different relationship to it. 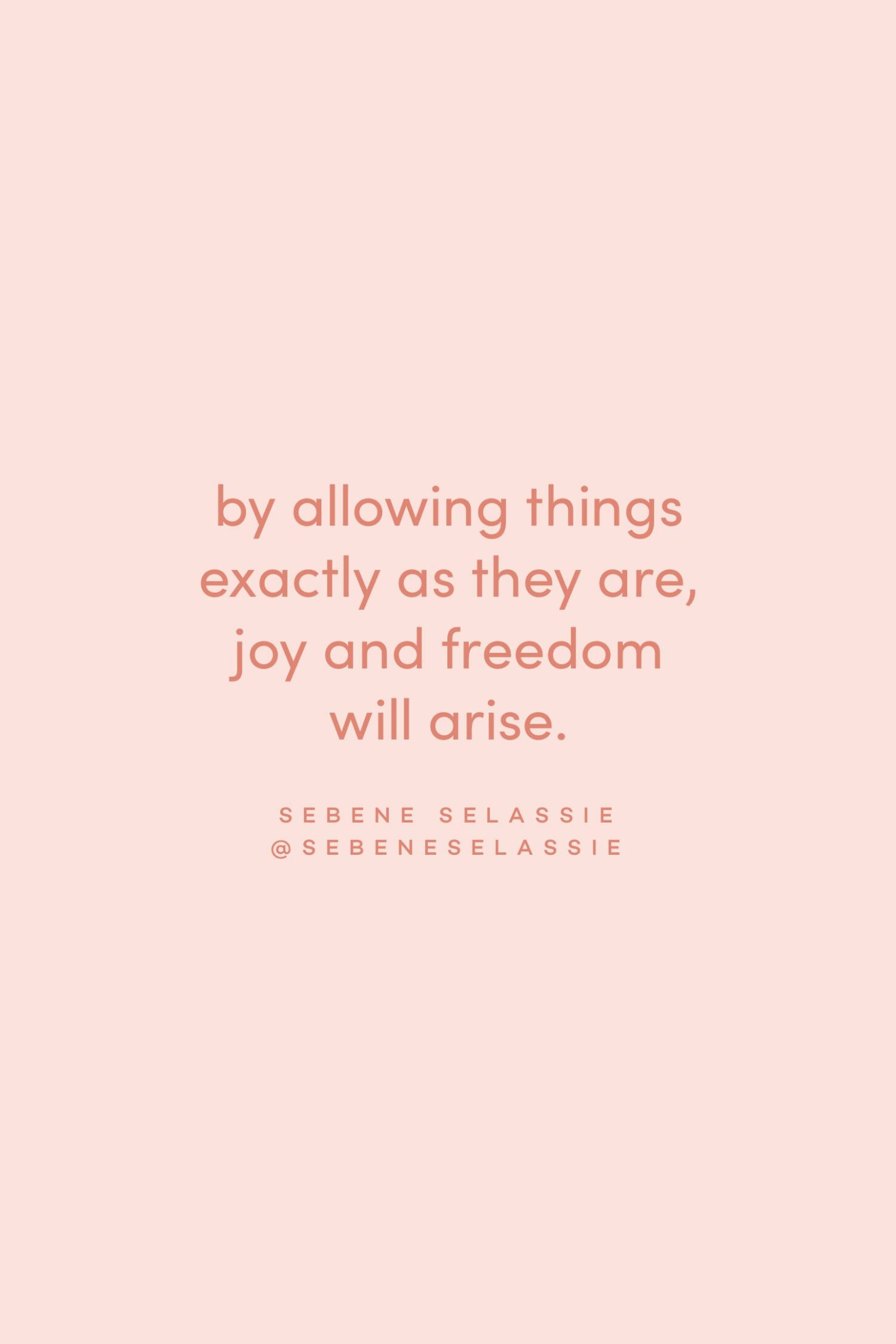 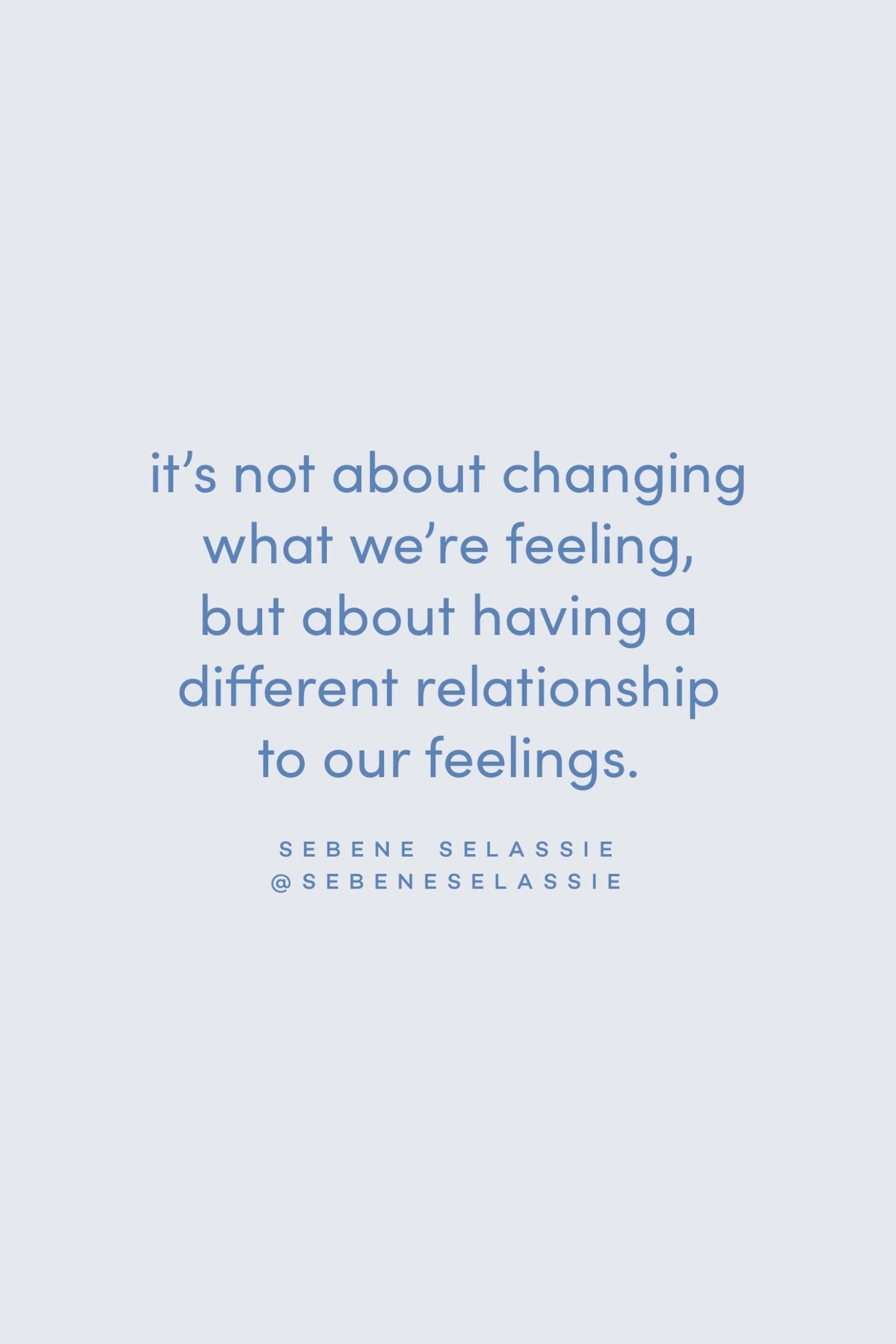 We can cultivate ease, we can have a feeling of freedom and joy in any moment, no matter what’s happening.

In fact, we must because we cannot control external realities.

If our happiness, freedom, and belonging are dependent on things outside being good all the time, we’ll never feel good.

But we can feel good in ourselves.

Feel your emotions and allow them to move through you, maintaining a relationship with them that is free.

Mindfulness does not have a specific belief system attached to it.

Part of connecting ourselves is to reckon the lack of attention to where these teachings come from, being Asian lineages, although they are accessible to anyone.

Current events and the book

Despite having written her book before the pandemic hit the United States and George Floyd’s murder, the themes Sebene wrote about are incredibly relevant right now.

Primarily, she writes about her experience of not belonging in the dominant culture.

We are separate, we are not the same, something that has become more clear than ever during the pandemic.

Hope for the book

Sebene is leading people on an exploration of their own conditioning and recognizing that their conditioning is a pattern of society.

We have patterns that are intergenerational, meaning they have been handed down to us through generations, like the unequal racial realities we have.

At the same time, systems of domination and control are also fed to us through media, social media.

Unplug from that to reconnect to your own values and sense of natural belonging.

What it really means to be healthy:

To be in touch with each moment: What are my needs? What am I really feeling? What’s really going on for me? How can I best be in integrity to respond to that?

SEBENE SELASSIE has studied Buddhism for over 30 years and received a BA from McGill University in Religious and Women’s Studies and an MA from the New School where she focused on cultural studies and race. For over 20 years Sebene worked with children, youth, and families nationally and internationally for small and large not for profits. Her work has taken her everywhere from the Tenderloin in San Francisco to refugee camps in Guinea, West Africa. She has been teaching meditation workshops, courses and retreats for over a decade and is a popular teacher on the Ten Percent Happier app. She is proud to have served on the boards of New York Insight Meditation Center, the Barre Center for Buddhist Studies, and Sacred Mountain Sangha. Sebene lives on unceded Lenape Territory in Brooklyn, NY with her partner and their dog. 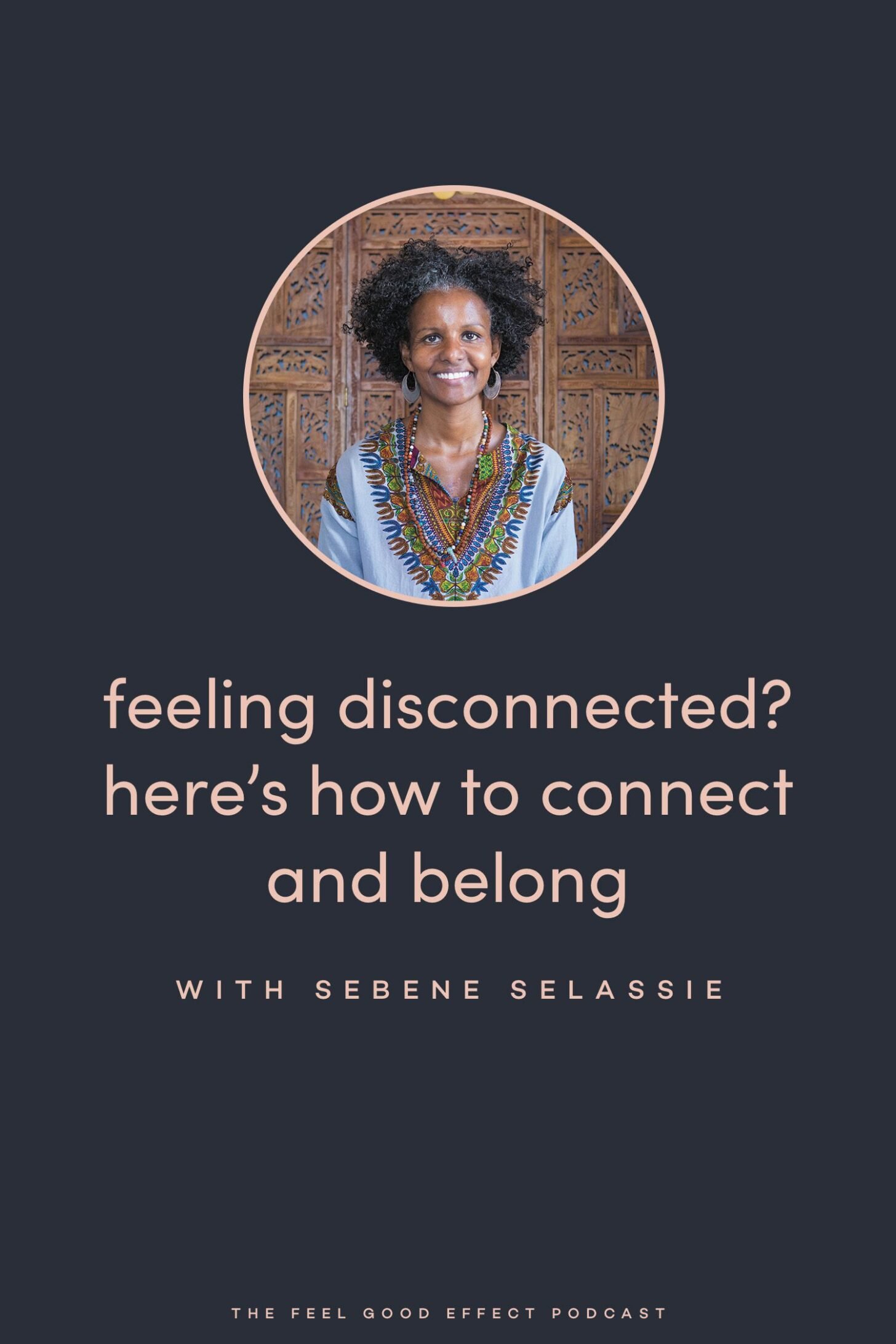 You Belong: A Call For Connection

Comments Off on Feeling Disconnected? Here’s How to Connect & Belong with Sebene Selassie Leave a comment »