Edit Your Life: How to Prioritize What Matters and Cut Out The Rest with Kelly Snowden

In this episode of the Feel Good Effect podcast, we’re talking with Kelly Snowden, Associate Editorial Director at Ten Speed Press, about the concept of editing your life, editing books, prioritizing what matters, and cutting out the rest.

Edit Your Life: How to Prioritize What Matters and Cut Out The Rest with Kelly Snowden

A career in editing

Like many editors, Kelly has always been a voracious reader.

Initially not knowing that editing as a job existed, it took some time for Kelly to get into the field.

She started off editing textbooks, which she loved the reporting part of, and eventually led her to pursue a master’s degree in a journalism program.

From there, Kelly started working for magazines in New York, mostly in food.

Eventually, she returned to the West Coast and started up at Ten Speed Press, where she began editing books on health and wellness.

A big part of editing is helping authors through the process of finding their authentic vision but optimized for readers.

Editing is somewhat of an invisible profession but has incredible impacts on a final product.

As a senior in college, Kelly was unsure what she wanted to do.

She went to Japan and taught elementary-school English for a year, but was in the same spot when she returned.

In looking for a job that spoke to her, she was connected with Straight Line Editorial Development, who does work on a lot of educational materials for elementary schools.

There, her role was examining curriculum, cutting away the fat and boiling it down to the essence.

Starting out in the editorial business is very much like being an apprentice; it’s crucial to have someone above you who believes in you and sees your potential as an editor.

The role of an editor

There are different roles with editorial houses.

Kelly is an acquiring editor, and part of her role is to look for talent and assess manuscripts that come in for potential.

An author and an editor really have to trust one another and feel out whether they can work together.

Each book is kind of its own mini-business and Kelly looks at each manuscript like it’s a new business idea to conceptualize how many books are likely to sell, what the length should be, with what type of paper, how many colors, etc.

It’s like building something up from the ground each time, which differs from newspaper or magazine work that already has a style.

It goes beyond editing the text; editors work to ensure that not just the words in the book, but everything about the book, convey the feeling that an author wants to share with readers.

Check out this show for more on writing and publishing a book.

When editors receive a manuscript, they don’t initially sit down with the author to discuss it but they still have to make a decision as to whether or not they will move forward with this person and their project.

It’s a combination of meeting standards and a felt gut sense.

Kelly prints out proposals, brings them home, and reads them in bed to get a sense of the work, reading it as someone else would.

She notices that if she wakes up in the morning still thinking about it, it’s generally a good sign that it’s a project she would like to pursue.

Behind that, she also has to convince her colleagues, which is more of a science than an art.

There are meta-data teams who are collecting search results from around the web to analyze trends.

They also look at what they are publishing as a company and decide together which direction they would like to do more in or potential holes to fill.

Competitive or comparable titles (comp titles) essentially entail looking at how a similar book to one that an editor wants to acquire performed in order to predict how the manuscript might do.

Because it requires there to be similar books out there in order to make an assessment, it’s a process that’s starting to be questioned more.

The proposal doesn’t always end up being what the book is.

Very few manuscripts are submitted and published as is, there are often tweaks made during the creative process.

Authors submit an initial table of contents as a drafted framework to talk more about with an editor before writing it all.

It allows for structure with room for some freedom.

For Robyn, her title changes drastically from “The Gentle Wellness Revolution” to “The Feel Good Effect”.

Talking it through with Kelly, Robyn explained that she wanted to get at “gentle is the new perfect” and “revolution” seemed nice juxtaposed to “gentle”.

On the editing end, there are title meetings every week because titles are tough; it’s hard to convey an entire message of a book in a couple words.

It wasn’t clear to everyone in the meeting about Robyn’s book what a gentle revolution was or the promise of it, but they did see the promise in the name “The Feel Good Effect”.

There isn’t always agreement and it can be a long process.

It’s about finding a balance between structure and evolution.

A book needs room to grow and evolve.

Part of the feel good effect is letting go of the striving mindset, letting go of perfectionism, all or nothing thinking, and comparison.

These ideas come into play during the editing process. 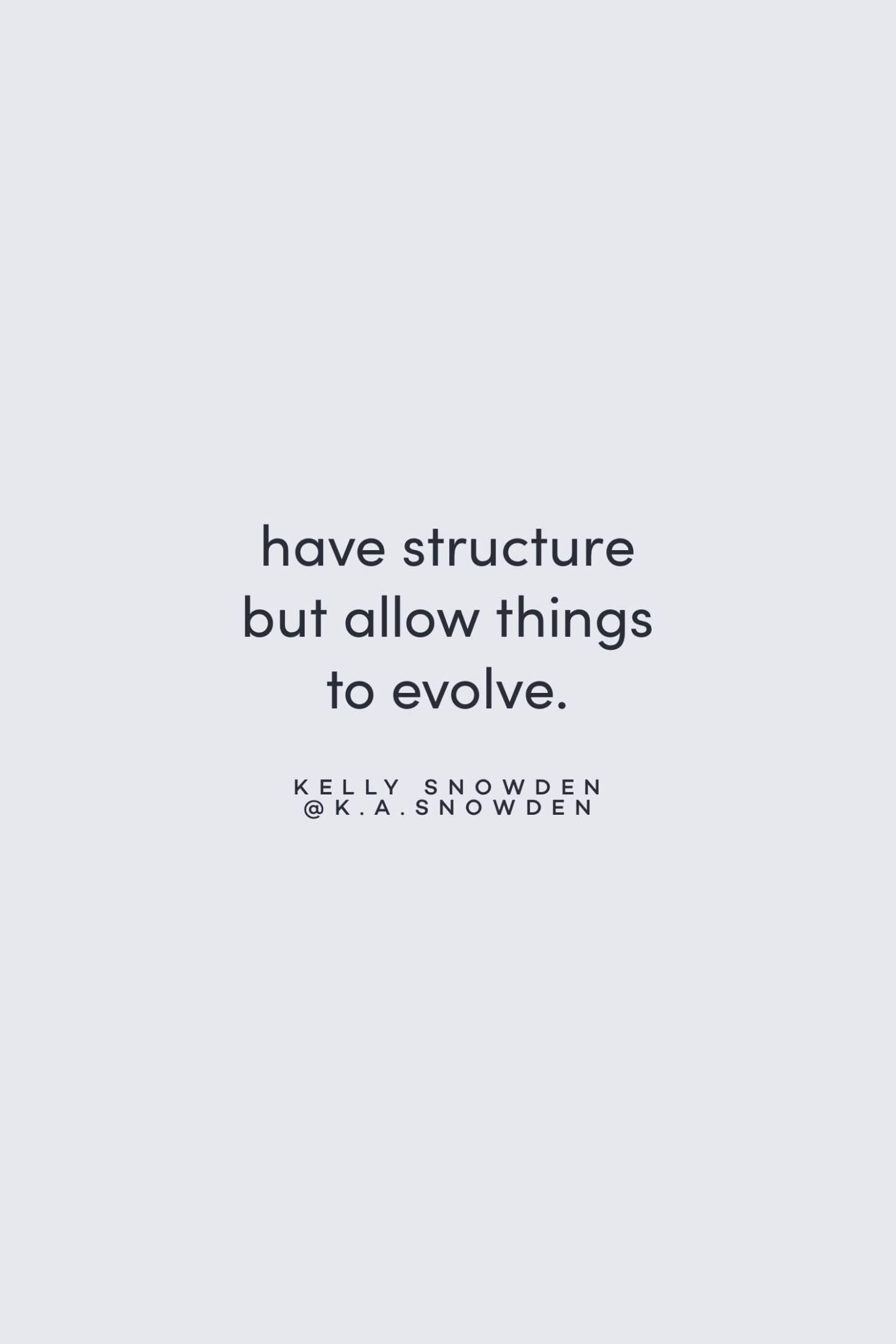 Editing: an art + a science

Editing comes down to taking away what doesn’t need to be there and leaving what does.

Part of the writing process is writing words, but the thing that makes it is deciding what stays in and what goes.

Some of the structural things Kelly frequently looks for are whether the chapter and heading titles are parallel and make sense together, whether different design elements support the main text.

But overall, editing is a lot of reading the book and thinking about how well it can be followed, taking into account different conventions.

For example, there are times when correct grammar is harder to follow because it’s not how people speak.

Additionally, Kelly reflects that especially with women authors, there is a tendency to over-support every point and dive really deep into ideas that have already been made clear.

At the end of the day, readers trust authors, so editors make the decisions about what should stay and where text can be cut. 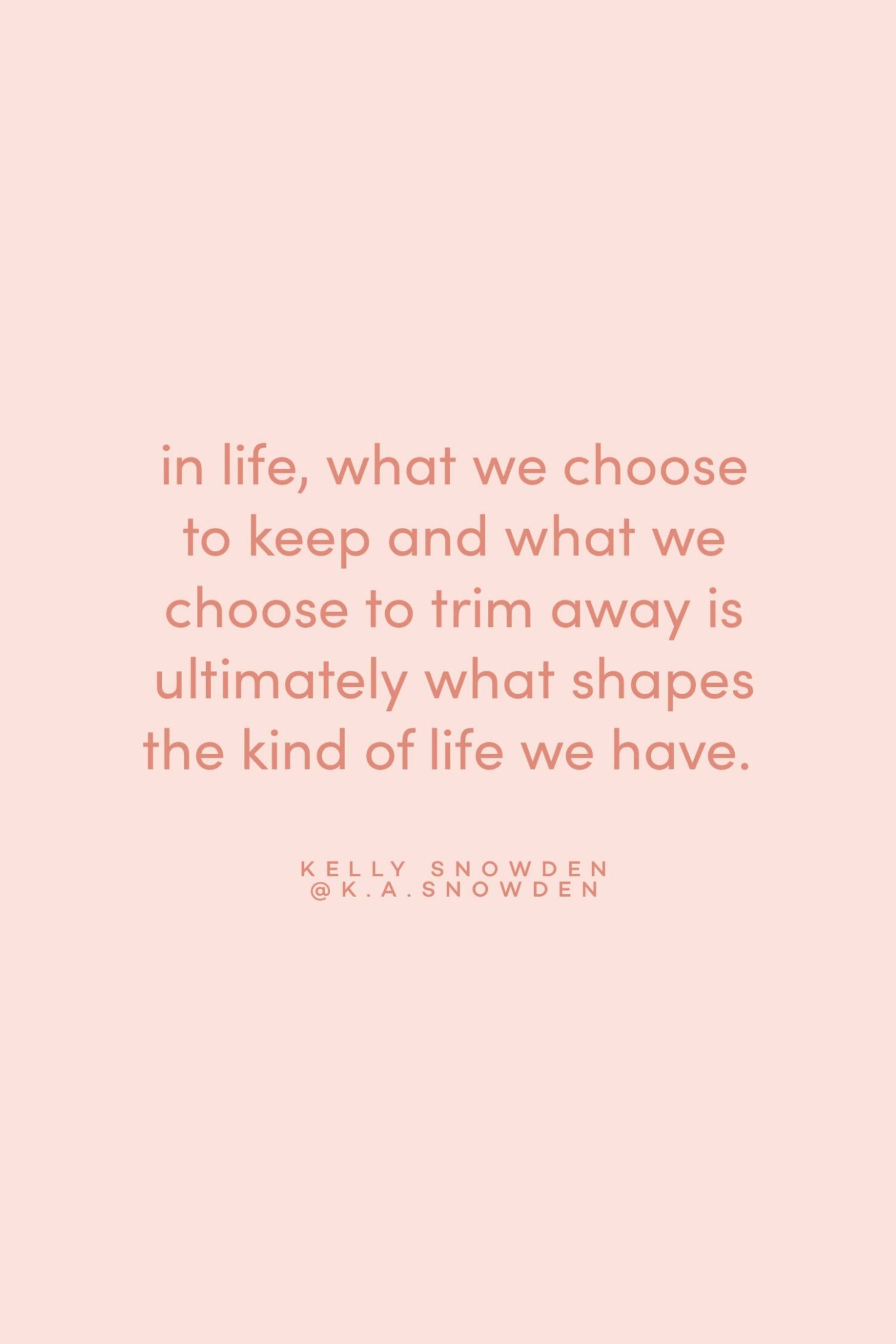 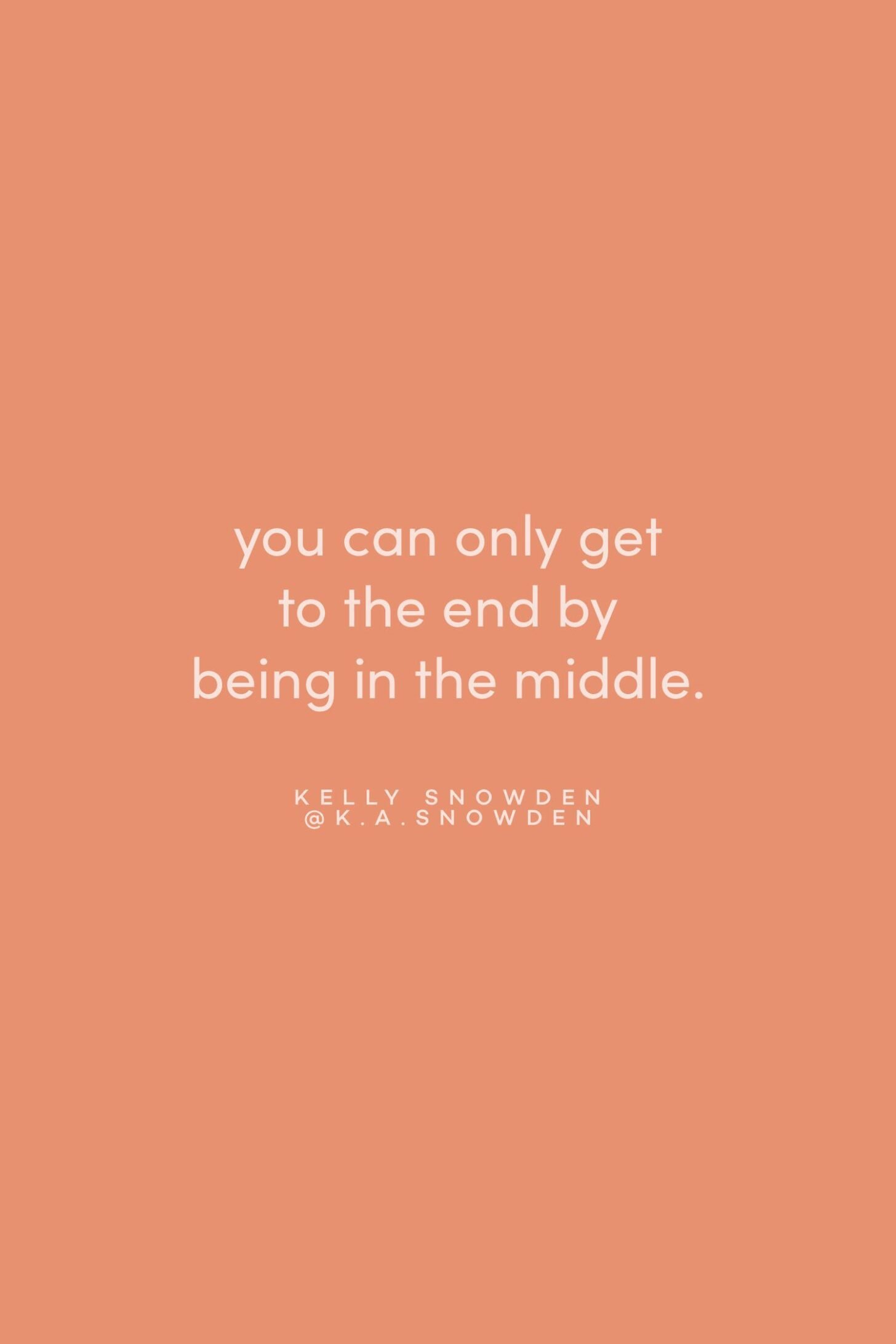 Editors significantly shape books without getting all of the credit.

Kelly loves books and ideas, and she thinks about books in some ways as a conversation she gets to have with the author.

There is a lot of give and take between editors and authors.

There’s no one answer, rather, the end result is essentially a reflection of a private conversation between the two.

You can only get to the end by being in the middle.

Kelly chose editing and she chose Robyn’s book because of the way she tries to give herself and others the benefit of the doubt.

This is how she approaches her life, too.

The intentional practice of asking questions in your life is important; if you don’t, life just starts happening to you.

Applying this mindset to life now

Kelly has a soon-to-be-first-grader and there are parts of school closing that required her to adapt.

Despite the challenges of this time, Kelly feels like the last fifteen years of her life prepared her for it.

She has been focused on finding simple, healthy meals to meal plan for the week

She also takes Robyn’s idea of not carving out an hour to exercise when you feel like you might only have five minutes.

She also downloaded a timer to schedule mini-wellness breaks into her days.

She still feels guilty about not being able to do more with school from home, but at the same time, she has let some of it go.

Self-compassion is more important now than ever. Being gentle with yourself allows you to be gentle with others.

It’s in the very early stages but that is what Kelly is most excited about right now.

Kelly and her family only go to the store every two weeks and get a farm box in between, so while there is some flexibility, there are some staples

She always keeps risotto on hand, pasta, frozen shrimp in the freezer, things she can do quickly, grilling a lot now that it’s summer

As things go bad, she reshuffles and reprioritizes.

Being healthy is being accepting of so many different parts of life, accepting of the good, the bad… it’s accepting things but also slowly changing the things you want to change over time… never staying in one place, keeping your life dynamic, but also being open to the ebbs and flows of everything.

Kelly Snowden is an associate editorial director at Ten Speed Press and specializes in working with
authors to create smart, compelling books that shine editorially. She has edited a wide variety of James Beard award-winning and -nominated cookbooks, including Champagne by Peter Liem, The Pho Cookbook by Andrea Nguyen, and Vegetable Kingdom by Bryant Terry. In the culinary space she has also worked on Food52 Works series books such as Genius Desserts, and recent titles include Aloha Kitchen by Alana Kysar and Cool Beans by Joe Yonan.

Kelly enjoys working with authors who bring a fresh perspective and encourage readers to explore new territory. She also acquires into the lifestyle and wellness spaces with books like How to Breathe from Goop contributor Ashley Neese, The New Stone Age from British Vogue journalist Carol Woolton, On the Farm by animal photographer Aliza Eliazarov, and The Feel Good Effect from popular podcaster Robyn Conley Downs.

Kelly is a California native who returned to the Bay Area after working in New York as an editor for six years at Food & Wine magazine. Outside of work, she can be found hiking and baking as much as her first grader will allow her. 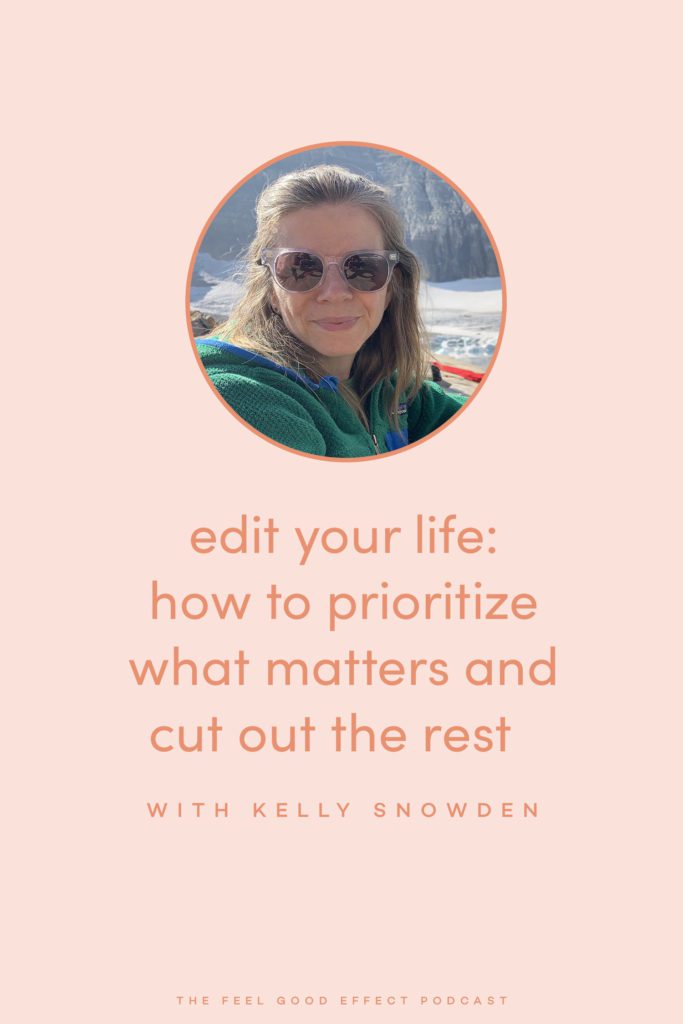 Edit Your Life: How to Prioritize What Matters and Cut Out The Rest with Kelly Snowden on the Feel Good Effect Podcast #realfoodwholelife #feelgoodeffectpodcast #setboundaries #priorities #editingtips

Connect with Kelly on Instagram @k.a.snowden or email at [email protected]

How to Write and Publish a Book: Three Surprising Lessons Learned During the Book Writing Process

How to Radically Simplify Meal Prep

Comments Off on Edit Your Life: How to Prioritize What Matters and Cut Out The Rest with Kelly Snowden Leave a comment »